Karua and Sabina had faced the Azimio running mate selection panel for the DP position.

•Karua and Sabina said they will remain steadfast, committed and united under Azimio La Umoja One Kenya Alliance and remain united to ensure Raila wins the presidency.

•Karua said women should give the country good governance by electing trusted and reformist leaders such as Raila. 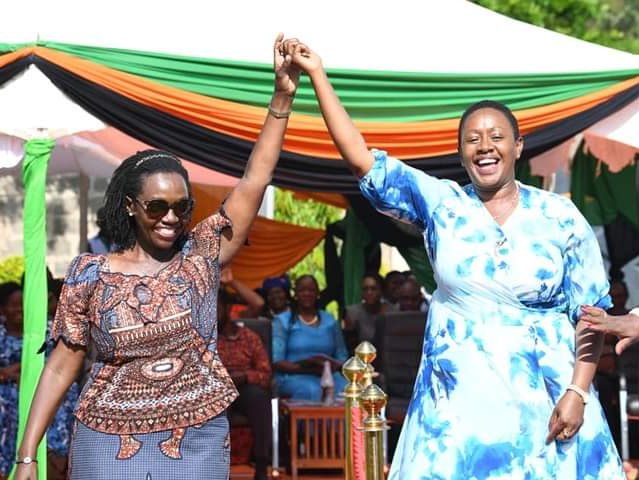 Narc-Kenya leader Martha Karua and Murang'a Women Representative Sabina Chege have pledged to support Raila Odinga's presidential bid even if he doesn't choose either of them for the running mate position.

They said they will remain steadfast, committed and united under Azimio La Umoja One Kenya Alliance and ensure Raila wins the presidency.

They spoke during the Maendeleo Ya Wanawake Organisation 70th Anniversary in Kisumu which was presided over by Ida Odinga.

Karua and Sabina had faced the Azimio running mate selection panel in their bids to deputise Raila.

“We want a running mate with good chemistry with Raila. We don’t want a repeat of what has bedevilled President Uhuru Kenyatta’s tenure,” Sabina said.

She said they hope the running mate position will be given to a woman but said it is not conditional.

Sabina while rallying women to vote for Raila said he respects and values women, and wants them in his government when elected.

“We want women to come out in large numbers to campaign and vote for the former prime minister,” she said.

Karua said women should give the country good governance by electing trusted and reformist leaders such as Raila.

“I want to urge you to look forward and elect leaders with good leadership. Look at their history and their achievements in the country,” she said.

The Narc leader praised Raila for his development track record especially when he was the minister for roads.

“We worked with him when I was the minister for water and he tremendously improved the roads infrastructure in the country,” Karua said.

She described Raila as a trusted leader who has fought for democracy and always championed the rights of Kenyans and should be elected.

“His track record in roads is seen widely and recognized locally and internationally. He is the AU High Representative for Infrastructure Development in Africa,” Karua pointed out.

She said it was time for Raila to lead the country and urged Kenyans to vote wisely in the August 9 polls.

Sabina announced that women leaders allied to the Azimio will form a women's movement to rally women across the country to vote for Raila.

The movement will enhance Raila’s voice under the ‘Sauti ya Baba’ Campaign across the country, she said.

“We want to reach 1 million women with Azimio La Kina Mama. We are launching very soon. We know a mother is the foundation of any homestead and if we are able to reach the hearts of women, Raila will become the fifth president,” Sabina said.

Karua also called on politicians to exercise decorum and respect each other and not engage in insults.

“Respect your elders and leaders even if you differ on ideologies or lose an election,” she said.

Karua pointed out that the country cannot be governed by insults, rhetorical remarks and disrespecting fellow leaders.

“You cannot lead the country by insults,” she added.

Karua noted that the late president Mwai Kibaki became president when he was aged and mature in leadership, saying the country needs a mature leader like Raila.

“We should elect leaders because of their character and integrity, not academic qualifications. You have good papers but lack integrity and are not trustable,” she said.

Maendeleo Ya Wanawake Organisation national chairperson Rahab Muiu said the running mate position should be given to a woman.

She urged women to turn out and vote for Raila saying it is voting that will make him win.

Former Principal Secretary for Gender Prof Colleta Suda called on women to elect leaders such as Raila who will promote women empowerment.

“Let us vote wisely. The person who will transform our lives is Raila. Don’t gamble because we are the majority at 52 per cent of the Kenyan population,” Suda said.

Karua said the outcome of the ongoing vetting will not make her quit Azimio.
News
2 weeks ago

They fronted Karua as the best candidate for the seat.
News
2 weeks ago
by MAURICE ALAL Correspondent, Nyanza Region
News
12 May 2022 - 21:41