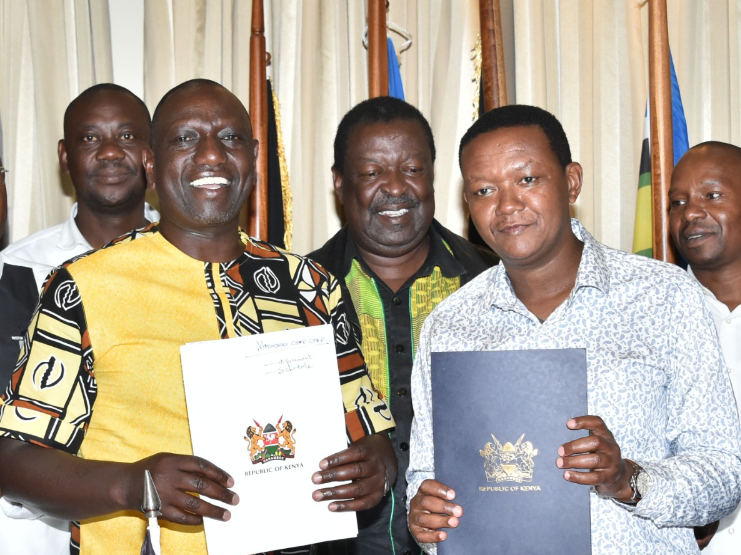 DP William Ruto with Machakos Governor Alfred Mutua and Kenya Kwanza leaders during the signing of the agreement on Sunday, May 8, 2022.
Image: WILLIAM RUTO/DPPS/TWITTER

Deputy President William Ruto has called a meeting with Mt Kenya leaders to explain what he will give them should he win the August 9 election.

Some leaders have openly said they are unhappy that the DP has allocated a significant part of the government to leaders from Western Kenya.

The leaders are openly threatening to ditch him for lack of a clear political package for the region.

It was not clear yet where the meeting would be held but those in the know told the Star it will happen on the weekend.

The region's leaders want Ruto to sign an agreement with them like the rest of other regions so they are clear on what they stand to gain.

Kirinyaga Governor Anne Waiguru confirmed that a meeting has been planned with the DP to "discuss the regional economic developments to be included in Kenya Kwanza manifesto."

There are indications the various agreements signed with other parties within the Kenya Kwanza coalition guaranteeing specified benefits to certain regions have jolted the DP's Mt Kenya team.

Former Kiambu governor William Kabogo, who is also the leader of Tujibebe Wakenya Party, on Thursday lifted the lid on the raging storm.

"If Ruto comes here (Mt Kenya), tell him that I am not interested in positions, not even my wife, but what is due for you (Mt Kenya) should be given to you."

Kabogo said Ruto will lose the presidency if some of his Mt Kenya allies dump him.

"If we leave the coalition even with 10 people, Ruto’s dream can be shuttered and made unrealistic,” Kabogo said at a rally in Thika.

Tujibebe was among nine small parties that signed deals with Ruto last month.

There is a feeling that, while the DP has had negotiations with the region's leaders allied to him about economic issues, the political agenda has never been on the table, unlike other regions.

Already a deal deposited with the Registrar of Political Parties and signed between UDA, Ford Kenya and ANC shows that Western Kenya's political and economic interests have been secured.

This leaves Mt Kenya without defined benefits accruing in the coalition for them should Kenya Kwanza win the presidency.

According to the Kenya Kwanza agreement, Musalia Mudavadi's ANC and Moses Wetang'ula's Ford Kenya will share 30 per cent of the government.

This would be on top of the multi-billion shilling development projects that Ruto's administration is expected to initiate in Western, including constructing 1,000km of roads.

The Star has established that the MPs have held at least two-night meetings in Nairobi to craft their own 'irreducible' minimums with Ruto.

On Thursday, Embakasi North MP James Gakuya, a Ruto ally, confirmed that they will be meeting with the DP before Monday.

Although he declined to reveal the agenda, the MP said "a lot of things will be streamlined" during the meeting.

"I don't want to preempt the details but we shall make them public after the sitting,” the MP added.

The MPs are said to have held a meeting on Tuesday night and another one on Wednesday, same time, at a Nairobi hotel to draft and firm up their demands before they are submitted to Ruto this weekend.

Both meetings were attended by nearly 50 MPs, including some of the DP's key allies from Mt Kenya region.

Part of the demand is for the DP to commit himself in writing that his running mate will come from Mt Kenya ahead of the Monday deadline.

The Independent Electoral and Boundaries Commission set May 16 as the deadline for parties to submit the names of their presidential candidates and running mates.

The DP has previously said picking a deputy for him is the "easiest of tasks", and that he will submit the name to the IEBC before the close of deadline on Monday.

The search for Ruto's running mate is said to have narrowed down to about four candidates with Tharaka Nithi Senator Kithure Kindiki leading the pack.

“As we have said before, Mt Kenya decided to forgo the presidency and support the Deputy President despite being home to nearly six million votes. We want Ruto to guarantee us that our sacrifices will not be in vain,” an MP from the region said.

The MPs are also pushing the DP to put pen to paper on the number of principal secretaries and ambassadorial appointments as well as other top state jobs that will be reserved for Mt Kenya.

Also on the table for Ruto are development projects, both ongoing and new ones, that the legislators want him to expressly commit to as part of Mt Kenya's stake in the Kenya Kwanza government.

IEBC set May 16 as the deadline for submission of presidential running mate names.
News
1 week ago

IEBC is expecting to receive the presidential running mates by May 16.
News
6 days ago
“WATCH: The latest videos from the Star”
by JAMES MBAKA AND AMOS NJAU
News
12 May 2022 - 23:00