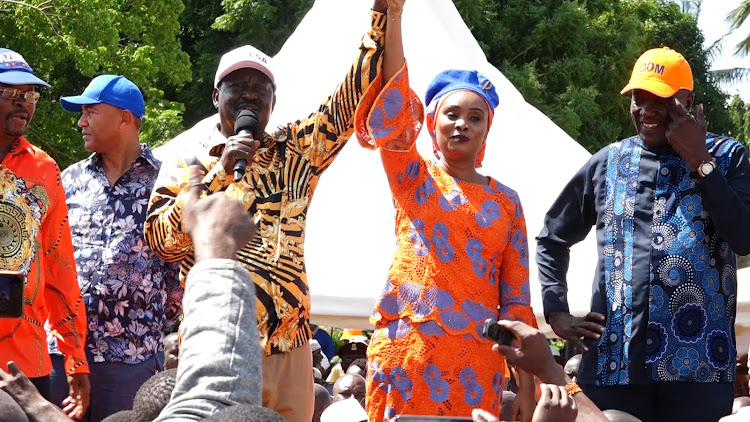 Azimio flag bearer Raila Odinga has said he will end historical injustices at the Coast if elected president.

He said he would soon be back to issue tittle deeds with President Uhuru Kenyatta.

Some of the titles belonged to the Mazrui family land, which was bought by the government.

“We want to make sure people get their land ownership documents,” Raila said.

The ODM leader who spoke at a rally in Msabaha grounds, Malindi, said if elected he will form a social protection programme to support poor citizens.

He said his government will ensure all children from poverty-stricken families get equal access to education, as it is the only way to transform their lives.

Raila said widows and single mothers shall be supported by his government.

The ODM boss, however, said Kilifi Governor Amason Kingi is a betrayer.

Raila said he helped Kingi right from the time he completed school to when he became an MP.

He said he then gave him two ministries and later made sure he became governor, but now he decided to abandon him.

“He told me the coastal people are no longer interested in ODM and wanted their own party. That’s why he came up with PAA, are you ready to fly?” Raila said.

The ODM boss said residents should remain firm and support him to become the fifth president as he is the only one who has the agenda to transform the country.

He said residents should vote six-piece for a strong team that will propel development. 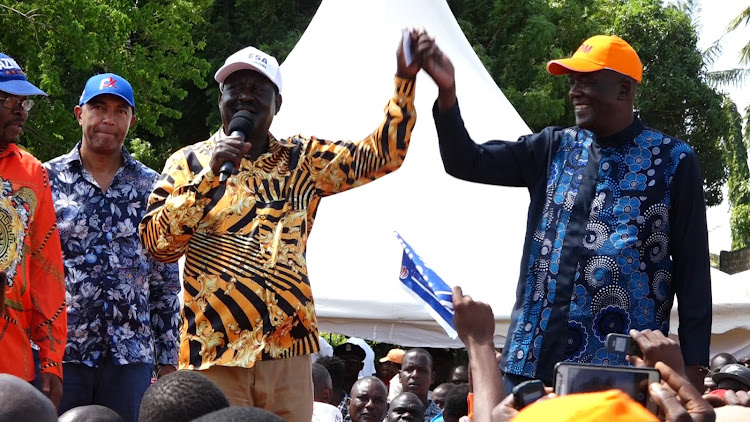 Joho said Coast residents should remain loyal to ODM as they have supported the party for many years and are about to rip fruits of their sweat.

He also took a jibe at Ruto, accusing him of critisising the government yet he (Ruto) is in the Cabinet.

The governor said instead of Ruto making noise about what he is going to deliver if elected president, why not put his demands to the President in Cabinet?

“Are you going to be fooled this way? Personally, I will not be fooled by such a person,” he said.

Mung’aro said the same people who looted Kilifi over the last 10 years have now ganged up and joined Ruto’s camp to continue their agenda.

He said the culprits will not be spared if he forms the county government. The former CAS said Kilifi faces challenges in health, education and has high poverty levels.

“From the governor who served for 10 years to the current Malindi MP, what have they done? How many women groups have benefitted from her?” he said referring to Kingi and Aisha Jumwa.

Junet said Kingi has been promised a job by DP Ruto but he has to deliver 50 per cent of the votes in Kilifi. 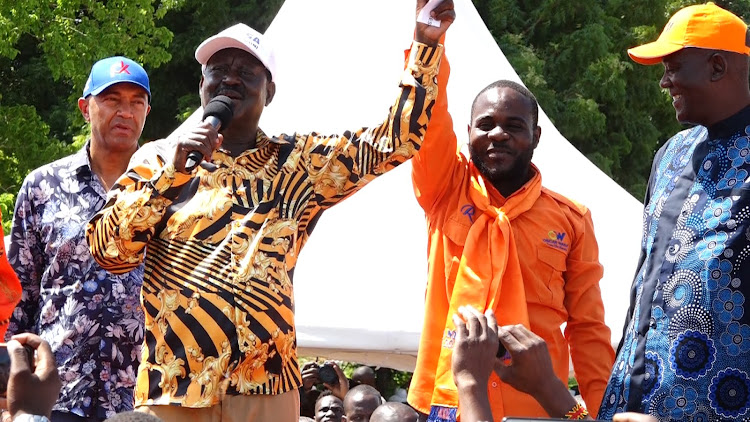 Mama Ida: Vote for Raila to spur his legacy

Raila is eyeing the presidency for the fifth time.
News
1 week ago

Say Raila is the only leader who has the best interests for the pastoralist community.
Counties
1 week ago

Voters are not cows! Junet, Sakaja in Twitter spat over Nairobi race

But in response, Junet said that Raila indeed deserves respect.
News
1 week ago

Kingi, Mutua exit not a loss to Raila - Analyst

The two quit Raila-led camp over what they termed as deals shrouded in secrecy.
News
1 week ago
“WATCH: The latest videos from the Star”
by ALPHONCE GARI Correspondent, Coast Region
News
12 May 2022 - 23:00