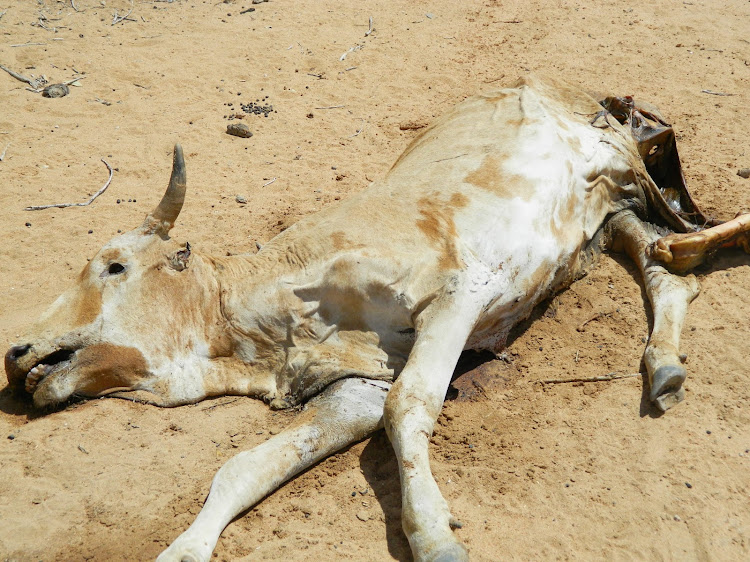 DROUGHT WORSENS: The carcass of a cow lay by the roadside. Drought has claimed hundreds of livestock.
Image: STEPHEN ASTARIKO

The number of people in need of relief food has risen from 3.1 million in February to 3.5 million, the drought authority has said.

The National Drought Management Authority on Thursday said the biting drought has persisted in 17 out of 23 counties.

“This is attributed to the poor performance of the 2021 short rains coupled with the previous two failed consecutive seasons and the late-onset of the 2022 long rains season,” the authority said.

The NDMA said the situation is alarming in eight counties of Marsabit, Mandera, Wajir, Samburu, Isiolo, Baringo, Turkana and Laikipia.

The rains were poorly distributed in duration and geography.

The report also shows pastures have deteriorated since March due to the late onset of long season rains.

“The month of April showed deterioration in vegetation across the ASALs compared to the previous month of March," it said.

The report shows the vegetation condition in April was worse compared to the same period last year.

Guterres  says governments must have cut emissions by 45 per cent by 2030, and achieve carbon neutrality by 2050
News
3 weeks ago

Nearly 7,000 children under five at risk of severe malnutrition

The situation is critical in  the counties of Garissa, Wajir, Mandera, Samburu and Turkana.
News
5 months ago

At least 2,800 children under the age of five suffer from nutrition deficiency.
Counties
5 months ago

Worst-hit areas include Lagdera, Ijara, Dadaab and Holugho
Counties
5 months ago
“WATCH: The latest videos from the Star”
by GORDON OSEN AND AGATHA NGOTHO
News
12 May 2022 - 23:00