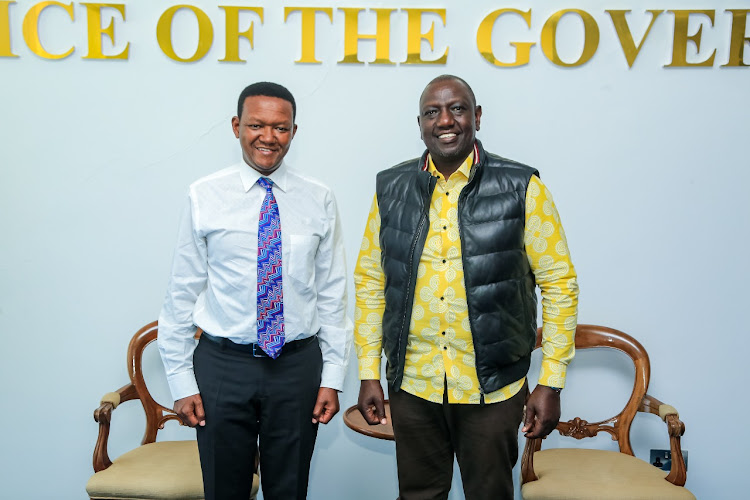 Deputy President William Ruto will amend the law to establish two new centres of power, according to a Kenya Kwanza Alliance deal

This would be a departure from his tough stance against any law amendments, arguing that would serve selfish interests of a few politicians seeking to share power at the expense of Kenyans.

It has now emerged that the Kenya Kwanza presidential hopeful shall create a powerful position to be known as the Office of the Prime Cabinet Secretary.

The position will be reserved for ANC, led by Musalia Mudavadi.

According to the agreement between Ruto's UDA, Moses Wetangula's Ford Kenya and ANC, the PCS post will have clearly defined roles.

Ford Kenya will produce the Speaker of National Assembly, according to the deal.

The position of Senate Speaker is not provided for in the deal, amid indications it would be handed to Kilifi Governor Amason Kingi's PAA party.

Some of the functions of the PCS contained in the agreement include assisting the president and the deputy president in the coordination and supervision of government ministries and state departments.

The PCS will also chair and coordinate government legislative agenda across all ministries and state departments in consultation with and for transmission to the coalition's leaders in Parliament.

The PSC will as well supervise and coordinate the technical monitoring and evaluation of government policies, programmes and projects.

Within the PCS's powers will be the role to oversee and coordinate the implementation of national government policies and programmes.

In what will give the office immense powers similar to those currently enjoyed by Fred Matiang'i, the Interior ministry shall be placed under the office of the PCS.

Matiang'i is currently the chairperson of the Cabinet committee on the coordination and implementation of all government development programmes, a role that was initially executed by Ruto.

The agreement, which was signed by Ruto in his capacity as the UDA party leader, Musalia and Wetangula, said the legislation will be done within 30 days following the August general election.

According to the agreement, the deal has also deliberately made provisions that will empower the Office of the Deputy President, including assigning defined roles.

The Deputy President shall also, under agreement, coordinate constitutional commissions and independent offices in matters that require intervention of national government.

The agreement further requires the president to immediately, upon being sworn in, publish in the Kenya Gazette, defined roles for the deputy president to ensure proper and efficient management and running of government.

The agreement compels the president to respect, defend and give full effect to the constitutional role, functions and mandate of the deputy president.

"The President of the Republic of Kenya shall guarantee the stature, dignity and financial and operational autonomy of the office of the Deputy President," the agreements says.

Ruto said free lunch will increase the retention of pupils in schools.
News
6 months ago

Ruto said they will reverse some aspects of the project's contracts.
News
6 months ago