• Through a statement on Wednesday, the embassy termed the killing as an “assassination by Israeli occupation forces". 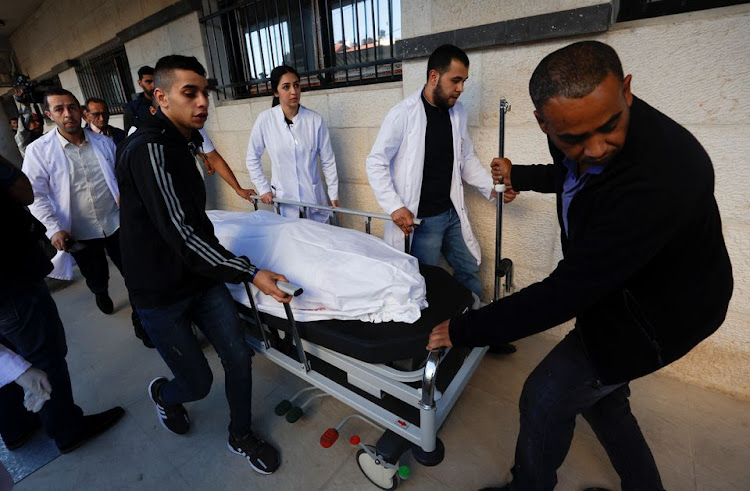 The body of Al Jazeera reporter Shireen Abu Akleh is carried at a hospital following an Israeli raid, in Jenin in the Israeli-occupied West Bank May 11, 2022
Image: REUTERS

The Embassy of Palestine in Kenya has condemned the killing of Al Jazeera journalist Shireen Abu Akleh during an Israeli raid in the West Bank on Wednesday.

Through a statement on Wednesday, the embassy termed the killing as an “assassination by Israeli occupation forces".

Akleh, a Palestinian from Jerusalem, and a veteran journalist, was reportedly shot in the head, while covering a raid on Jenin Refugee Camp in the occupied West Bank.

“Abu Akleh was wearing a PRESS vest, when she was shot dead, while one of her other colleague [Ali al-Samoudi] was shot in his back and is in a very critical condition.

"The Embassy aligns itself with statement of the State of Palestine Ministry of Foreign Affairs and Expatriates, denouncing Abu Akleh's murder as a "crime of execution",” the embassy said.

It also added that it holds the Israeli government fully responsible for the "heinous crime", which is "part of the occupation's policy of targeting formalists to obscure the truth and commit crimes silently".

The Israeli military acknowledged its forces shot during the Jenin refugee camp raid, responding to fire and explosives.

“As part of the activity in the Jenin refugee camp, suspects fired heavily at the force and threw explosives. The force responded by firing. Vulnerability detected. There are no casualties to our forces. The possibility that journalists were injured is being investigated, possibly by Palestinian armed gunfire,” the translated Israeli military tweet said.

It said the forces were on a mission to arrest terror suspects in the refugee camp.

In tweets shared by the Israeli Foreign Ministry, Defence Minister Benny Gantz is quoted saying preliminary findings by the Israel Defence Forces showed no gunfire was directed at the journalist but the probe was ongoing.

“On the other hand, we have seen footage of indiscriminate shooting by Palestinian terrorists, which is likely to have hit the journalist. We will communicate our findings in a clear and transparent manner to our American friends, as well as to the Palestinian Authority,” Gantz said.

However, Al Jazeera said Al-Samoudi and other reporters at the scene said there were no Palestinian fighters present when the journalists were shot.

“Shatha Hanaysha, a local journalist who was standing next to Abu Akleh when she was shot, also told Al Jazeera that there had been no confrontations between Palestinian fighters and the Israeli army,” Al Jazeera said in its report.

The Qatar-based Al-Jazeera said it holds Israel responsible for killing in cold blood its veteran correspondent in occupied West Bank.

The Palestine Embassy maintained the murder was an extension of the ongoing field executions against Palestinians and journalists by Israel to “silence the voice of truth, and to cover up the crimes of the occupation and its settlers against our people”.

It called on press agencies, human rights and humanitarian organizations to document the killing for the purposes of submitting it to international courts, especially the International Criminal Court.

In April, a petition accusing Israel of systematic targeting of journalists working in Palestine, and its failure to properly investigate the killings of media workers were submitted to the International Criminal Court.

The groups named Ahmed Abu Hussein (2018), Yaser Murtaja (2018), Muath Amarneh (wounded in 2019) and Nedal Eshtayeh (wounded in 2015) among those who were either killed or maimed by Israeli forces while covering demonstrations in Gaza.

"All were wearing clearly marked PRESS vests at the time they were shot," teh petition said.

The complaint also details the targeting of media and bombing of the Al-Shorouk and Al-Jawhara Towersin Gaza City in May 2021.

Says the position is in line with the declared positions of several other African states.
News
10 months ago

World has let Palestine down as apartheid takes root — envoy

It will be built on an eight hectare (20 acres) land and will be used to train farmers for eight weeks.
News
1 year ago

No ceasefire yet in Israel - Palestine crisis

In two days at least 32 Palestinians have been killed, 54 Israelis injured.
News
2 years ago

Gendler spent a large part of his short stint in the accredited host states.
News
2 years ago

Food Security was among the four agendas the President prioritised in his second term.
News
3 years ago
WATCH: The latest videos from the Star
by ELIUD KIBII Subeditor and writer
News
11 May 2022 - 20:25