Muthama said he snubbed Kenya Kwanza rally in Machakos because of Mutua.

•Muthama said that Mutua is a liar and he can therefore not work closely with him.

•He added that he purposely snubbed the Kenya Kwanza Alliance rally on Tuesday because of Governor Mutua's presence. 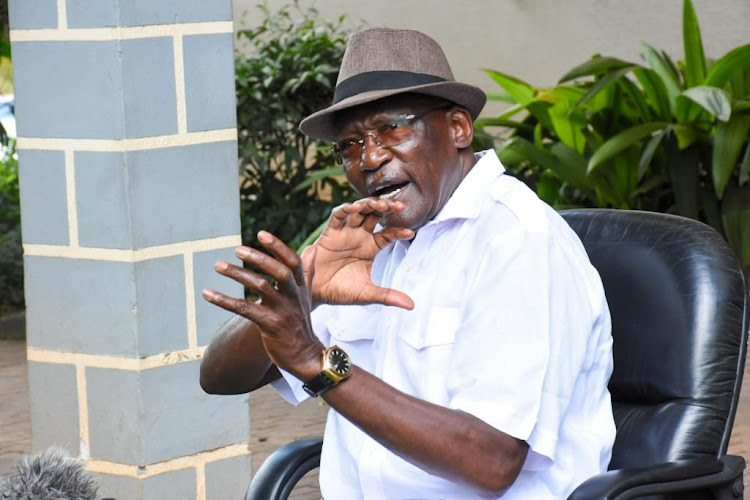 Mutua on Monday decamped to the Kenya Kwanza Alliance side led by Deputy President William Ruto.

In his interview with the KTN News on Wednesday night, Muthama divulged that he has political issues with Mutua.

"I and Mutua have had differences for some time. It is not personal, but political. I had problems with him when I was the Machakos senator because he lied to the people of the county and maligned my name. If I know someone is a liar, I can't forget all that within a day."

He added that he purposely snubbed the Kenya Kwanza Alliance rally on Tuesday because of Governor Mutua's presence.

The DP led a host of Kenya Kwanza leaders in Tala, Machakos, for a rally that seemingly served as Mutua's homecoming party after joining Ruto's camp.

Muthama said despite the rally being held a stone's throw away from his home,  he could not attend because of what he termed as Mutua's  "deceit".

The UDA Chairman said he will only work with Mutua if he accepts to go back to the people of Machakos county and own up to what he called " his lies".

Among the issues, he raised as the bone of contention with Mutua include the Governor's alleged statement that he had connected all households in Machakos with water. Muthama says that did not happen.

"The money that was allocated for that project cannot be located where it is," he said.

Muthama also alleged that Mutua told the people of Machakos that he had built a number of dams in the county but that is not the case.

When contacted by the Star to respond to the allegations, Mutua said he had no comment on them adding that he is focused on Ruto's presidency.

"I have no comment on the allegations. I will not be distracted from the job at hand and that is of ensuring Ruto secures the Presidency and Kenya Kwanza forms the next Government," Mutua told the Star.

Now that they are in one political camp, Muthama said that Mutua is at liberty to decide to campaign for the DP and even vote for him, but that will not change his perception of his style of leadership.

He said the Machakos governor can run campaigns for Kenya Kwanza Alliance in the county but he won't be a party to it.

"I can say that the time for me to have a cup of tea with Mutua is not yet. I'm yet to campaign with him, the time to walk with him is yet to come because he has committed a lot of mistakes."

The DP and Mutua are set to hold a rally in Tala, Machakos county.
News
2 weeks ago

Why Mutua ditched Raila for Ruto

Mutua says the MCC party has been kept in the dark over the Azimio affairs.
News
2 weeks ago
WATCH: The latest videos from the Star
by KEVIN CHERUIYOT Online Journalist
News
11 May 2022 - 19:44