Ruto takes his bottom - up economic model campaigns to Ukambani ahead of polls.

•Mutua on Monday announced he had ditched Azimio La Umoja One Kenya Alliance. 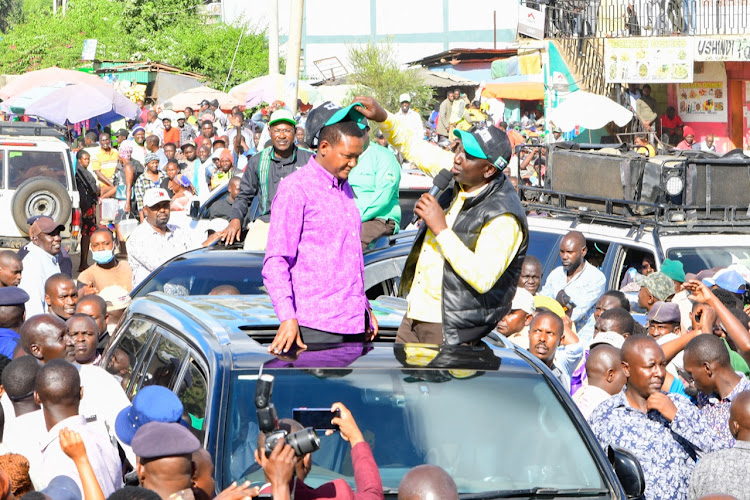 Mutua on Monday announced he had ditched Azimio La Umoja One Kenya Alliance.

The DP during the rally popularized his bottom-up economic model as he wooed voters to back him for the top seat.

He criticized Raila and his team claiming that they were keen on constitutional review at the common man’s expense.

"They should stop telling us about changing the constitution and creating positions. Let them wait until we plan about the economy and matters to deal with ordinary citizens," Ruto said.

"We are here today because our agenda is about creating jobs for the youths. We will  invest in housing, agro-processing, value addition and manufacturing to ensure our youths  are employed."

Ruto said his government was focused on improving the economy as well as creating jobs for hundreds of unemployed youths across the country.

He said all Kenyans’ businesses should be respected.

"They should stop undermining others. This Kenya is not for the rich. Small scale traders must be given a chance to also thrive."

Ruto said if he wins the Presidency, his administration will allocate funds to micro and small enterprises as grants to boost their businesses.

Wetangula on his part noted that the August 9, polls are about reducing the cost of living.

“The August polls will be about voting to reduce fertilizer, flour and oil prices generally because the current government has forgotten about its citizens."

“The cost of fertilizer has shot from Sh3, 000 to Sh6, 000 and the government is silent. We are asking Kambas to unite as Kenyans to send this government home,” he said.

Wetangula further criticized Azimio for exposing Wiper Leader Kalonzo Musyoka to an interview for the deputy presidential candidate position saying it was an embarrassment to the former vice president.

Mudavadi said they are determined that they will the August polls and save Kenya from the economic turmoil.

“We want to defeat them in the first round,” Mudavadi said.

Mutua said Ruto is the best person to liberate Kenyans from the york of poverty.
News
8 months ago