They slaughtered black sheep as a mark of endorsement, saying she's best choice. 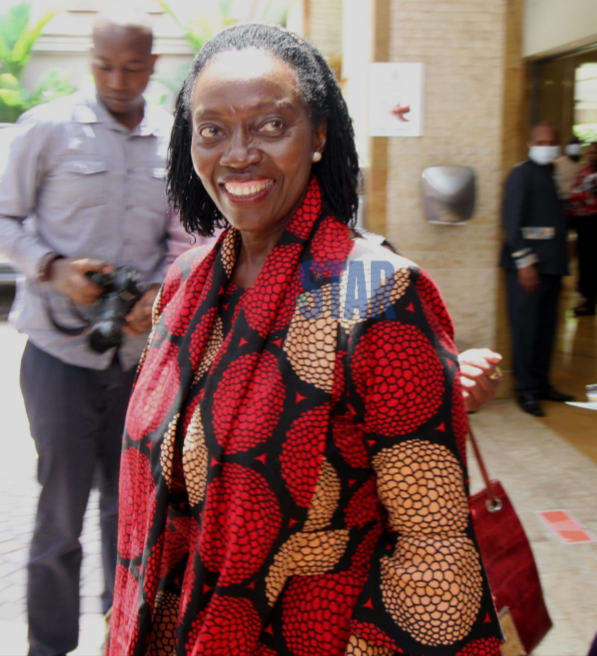 Narc Kenya leader Martha Karua after an Interview for the Azimio running mate position at Serena Hotel on May 9, 2022.
Image: ENOS TECHE

Kikuyu elders on Tuesday slaughtered a black sheep to mark the endorsement of Narc Kenya leader Martha Karua as a preferred candidate to deputise Raila Odinga.

The event was held at their Two Rivers office and was attended by elders from Kiama Kia Ma and Kikuyu Council of Elders as well as Kirinyaga Senator Charles Kibiro.

Speaking during the event, Kikuyu Council of Elders national chairman Wachira Kiago said they have held  consultations with various leaders from the Mt Kenya region and agreed Karua is the best choice for the job.

He said Azimio presidential aspirant Raila Odinga should think about Karua, if he minds the votes from Mt Kenya.

“We have sacrificed this sheep to seal the deal that has been agreed upon by all leaders from the Mount Kenya region. We have decided that Martha Karua deserves the seat to empower women leaders in the country,” Wachira said.

He further said the slaughter of the sheep was to signify that no more blood will be shed during the coming election.

“We are also looking at someone who can add something to the vote basket, which is why we support Karua,” he said.

About a month ago, Wachira led a similar group of elders where they vowed to curse Deputy President William Ruto, if he continues attacking and disrespecting President Uhuru Kenyatta.

“We have the list of candidates that have been proposed as suitable candidates from Mt Kenya but they should wait for their time," he said.

Gaithuma also said a Raila-Karua ticket will liberate the country from bad leadership.

Kinyua said those who have been inciting communities against each other should stop.

About a month ago, Maendeleo Ya Wanawake leaders in the coastal region also proposed Karua for the sake of gender equality.

The organisation's national treasurer Agnes Viola said Karua has been tried and tested and has the experience.

The leaders spoke in Mombasa after a meeting to plan for the organisation's 70th anniversary to be held later this month.

Female leaders from the Azimio La Umoja One Kenya Alliance coalition also fronted Karua as the candidate of their choice about a month ago.

Kalonzo had initially said he would not attend the interview.
News
3 months ago

It wasn't an interview, Chege says after facing Azimio panel

"Despite the outcome, I will stand with Azimio and keep supporting Raila."
News
3 months ago

Why I changed my mind about Raila deputy interview- Kalonzo

He described the exercise as more of a conversation and not an interview
News
3 months ago
“WATCH: The latest videos from the Star”
by By Amos [email protected]
News
10 May 2022 - 22:00