Expressway contractor to fix old road at no cost to taxpayer

MPs say no fines would be charged without Parliament's approval

In Summary
by MOSES ODHIAMBO Journalist and Political Writer
News
10 May 2022 - 23:00
Read E-Paper 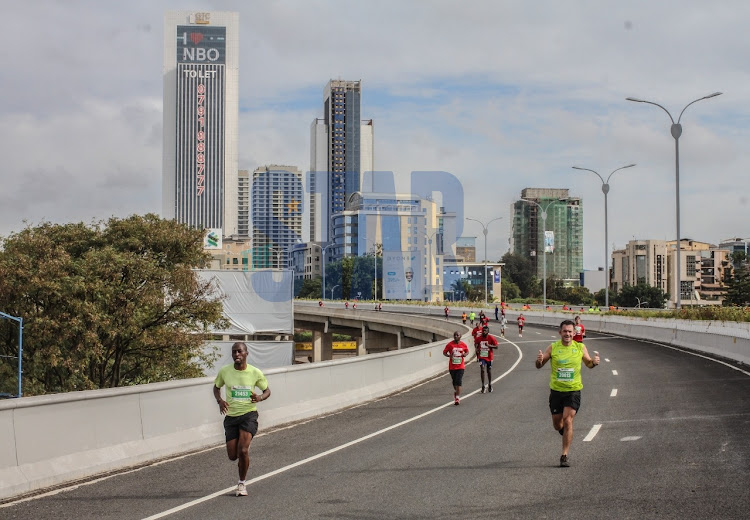 Participants take part in the Nairobi City marathon dubbed the Uhuru Classic done along the Expressway on May 8, 2022. The Marathon flagged off at Nyayo Stadium witnessed thousands of participants racing for fun in the five and 10 kilometre race as well as elite athletes competing in the 21 and 42 kilometre.
Image: ENOS TECHE

Taxpayers will not shoulder the burden of restoring the old James Gichuru – Mombasa road stretch that was destroyed following works on the Nairobi Expressway.

Kenya National Highways Authority officials on Monday told members of the National Assembly Transport Committee that the contractor would complete the works soon.

The initial dual carriageway and service lanes, auxiliary utilities – water and sewerage, fibre optic cable, and electricity, as well as any lanes that may have been affected by the expressway design, would be restored, the committee chaired by Pokot South MP David Pkosing heard.

An official not authorised to speak to the media said the work plan was complete and implementation was already ongoing in some areas.

The agency also said lack of footbridges and pedestrian walkways, among other issues, would be addressed on a case by case basis.

At the same time, motorists would not be charged any fines until any of the proposed fees are approved by Parliament.

There were indications in the press that users would be subjected to fines for stalling for lack of fuel or rundown engines, damaging ticket issuing machines and vehicle scanners.

It was also reported that those caught making drawings, graffiti or street art would be fined as well as pollution by oils and industrial wastes and damage to any installations.

“There is no fine yet prescribed anywhere because if we are doing fines, it has to come into Parliament and the committee will process and pass it. We don’t have something like that,” Pkosing said.

He also said they were confident the contractor would restore the destroyed parts of the carriageway, adding that the works would commence soon.

“We initially thought it would be on us to allocate the monies to KeNHA to rebuild the road but we are now glad they have clarified it is not the case,” the MP said.

The committee certified the Sh65 billion expressway as complete and assured they would follow up to ensure the lower road is restored and improved.

Among the rules for users include no speeding above the set limits and any violations of speeding will attract a fine. There would also be no stopping, say to take pictures.

The road is fitted with cameras at every kilometre with a range of up to 1,000 metres hence providing full coverage.

Officials at Moja Expressway said the entire road is monitored and recordings taken every 30 minutes.

The cameras will also detect any need for emergency response and send signals to the command centre in case of fire or accident.

In case of an accident, it would send a signal to the police for dispatch of first responders or fire brigades in the event of a fire.

“The entire process of toll monitoring is to ensure efficiency and proper management of the carriageway,” she said.

The expressway is set to be opened to the public on May 12 ahead of the official launch by President Uhuru Kenyatta.

“We are impressed by the pace of work and we believe this infrastructure masterpiece will go a long way in serving Kenyans efficiently,” Gakuya said.

Pkosing added that Kenyans would no longer lose up to Sh50 million a day as was the case when visitors flying in through JKIA got holed up in traffic for hours.

Uhuru said the expressway will be open for trial.
News
3 months ago

Graffiti and posters have also been banned on the Expressway and classified as vandalism.
News
3 months ago

Tuwei said the rally is to be flagged off at Nyayo Stadium from 7:30 am.
News
3 months ago
“WATCH: The latest videos from the Star”
by MOSES ODHIAMBO Journalist and Political Writer
News
10 May 2022 - 23:00
Read The E-Paper