IEBC is expected to receive the names of running mates nominated by presidential aspirants by latest May 16.

• Ruto said the name of the person that will deputise him will be known before the deadline set by the Independent Electoral and Boundaries Commission.

• IEBC is expected to receive the names of running mates nominated by presidential aspirants by latest May 16. 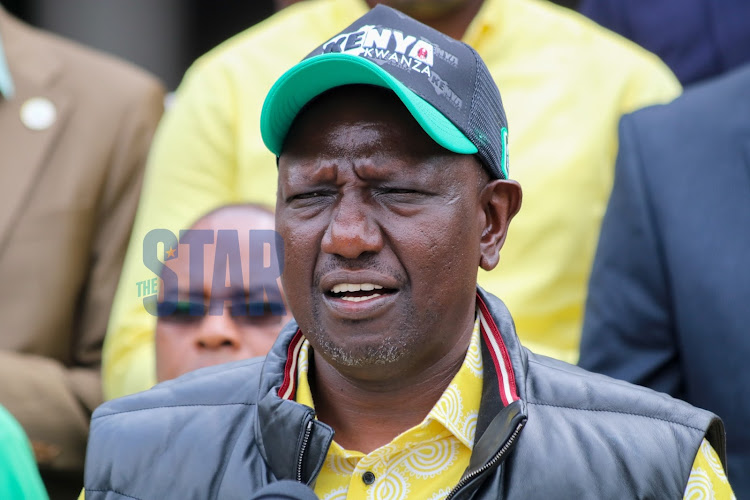 DP William Ruto speaks at his Karen residence as he welcomed Kilifi Governor Amason Kingi to the Kenya Kwanza coalition on May 10, 2022.
Image: WILFRED NYANGARESI

While speaking to the press at his Karen residence on Tuesday, the second in command said the name of the person that will deputise him will be presented to the Independent Electoral and Boundaries Commission before the set deadline.

"I want to assure you that as Kenya Kwanza and as a candidate in the next General election we will have our running mate forwarded to the IEBC before the deadline," Ruto said.

IEBC is expected to receive the names of running mates nominated by presidential aspirants by May 16.

In the Ruto-led Kenya Kwanza Alliance, Tharaka Nithi senator Kithure Kindiki, Kirinyaga Governor Anne Waiguru, Mathira MP Rigathi Gachagua and ANC leader Musalia Mudavadi are some of the leaders believed to be gunning for the position.

National Assembly Speaker Justin Muturi, a late entrant into the Kenya Kwanza coalition, has also been mentioned severally as a potential running mate.

While the Kenya Kwanza camp has remained tight-lipped on the criteria they are using to select Ruto's running mate, the Azimio la Umoja One Kenya Alliance coalition opted for interviews to determine the suitable person to deputise Raila.

The interviews began on Monday, May 9 and will end on May 10.

Kanu's Gideon Moi opted out of the interviews, with his party endorsing Kalonzo Musyoka.

After the interviews, the Azimio Running Mate Selection panel will give a report on suitable candidates to the Azimio council and thereafter the candidate will be announced.

In Azimio-OKA, Wiper leader Kalonzo Musyoka, Former Gatanga MP Peter Kenneth, Narc Kenya leader Martha Karua and Agriculture CS Peter Munya are some of the leaders have been mentioned as looking to deputise Raila Odinga in the August 9 polls.

Why I changed my mind about Raila deputy interview- Kalonzo

Kalonzo had initially said he would not attend the interview.
News
1 month ago
WATCH: The latest videos from the Star
by BRIAN ORUTA Digital Journalist
News
10 May 2022 - 13:02