Tuju said Mutua was already negotiating with Ruto even before sealing deal with Azimio.

•Tuju now says Mutua was already in talks with the Kenya Kwanza for a while before making the announcement on Monday.

•The Azimio official while addressing the media on Monday said Mutua wanted the Azimio document to use for negotiations with Deputy President William Ruto. 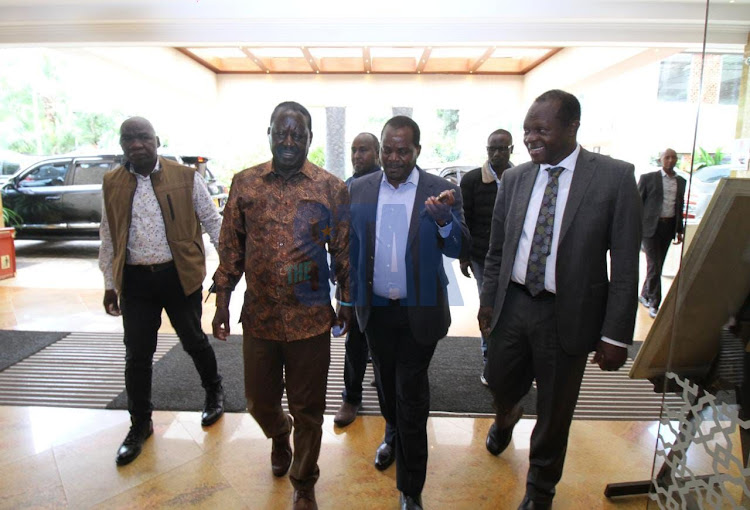 The Azimio official while addressing the media on Monday, over Mutua's defection, said Mutua wanted the Azimio document to use for negotiations with Deputy President William Ruto.

Tuju said Mutua was already in talks with the Kenya Kwanza for a while before making the announcement on Monday.

“Some of the people who said that they needed this document we know that they were negotiating with the other side and they needed it for purposes of benchmarking," Tuju said.

"Since we knew that was going on there was no need to continue negotiating with them. You can’t tell someone you want to leave a marriage because of a marriage certificate. They are lying to all of us.”

Tuju added that the coalition will not force anybody to stay, and anyone who is willing to leave is at liberty to do so.

Mutua and his party signed a coalition agreement with the Kenya Kwanza alliance on Sunday.

Mutua raised concerns over being sidelined in the running of the Azimio party and also being denied the opportunity to field candidates in some areas.

The Maendeleo Chap Chap leader then said he is now a supporter of Ruto's presidency adding that he believes he will deliver development to Kenyans.

"Deputy President William Ruto is a good man and he will change this country. Last night we signed an agreement with Kenya Kwanza and here is a copy," he told the press.

"Unlike Azimio, here is a document we signed, and we know its content. They played us and sneaked a document on zoning. They have been doing nothing but managing us."

Mutua has been protesting exclusion from the Azimio coalition.
News
8 months ago