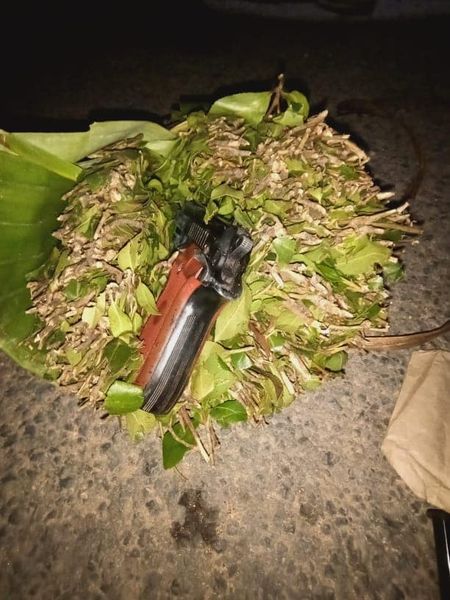 HIDDEN IN MIRAA: An Ekol P29 pistol wrapped in a bunch of miraa that was recovered on May 5 at a roadblock on the Isiolo-Moyale highway.
Image: NPS

More roadblocks have been mounted on the Isiolo-Moyale highway by security agencies to curb rising insecurity.

Last Thursday, a multi-agency security team manning a roadblock at Merti junction recovered an Ekol P29 pistol during a routine check on passengers plying the route.

Police said the suspect was hiding the pistol in a bunch of miraa wrapped inside a banana leaf.

Abdulahi Hussein Sharamo, 33, was a passenger on a Moyale bound bus.

He was arrested for illegally possessing a pistol and two rounds of nine millimetre ammunition concealed in miraa wrappings.

The officers said they found two more bullets in his pockets.

Police said Sharamo had been hesitant to undergo the routine screening.

The multi-agency security teams are on operation in the disturbed areas of Marsabit county and its environs. They aim to maintain sustainable peace and coexistence among communities.

The month-long operation started on May 2 and will be extended to Kom and Merti in Isiolo county.

“You may recall that just recently our security forces intercepted a huge cache of explosives in Merti. Those explosives were meant for Nairobi and were being moved by a terrorist cell.

"The route has become worrisome to all of us over the recent years. I cannot count the number of times our police officers have disrupted planned terror activities being channeled through that route,” Matiang'i said.

A security operation is ongoing in the area to flush out criminals behind attacks.
News
1 month ago

They are liaising with Ethiopian counterparts across the border to tame any crossings by goons
Counties
1 month ago
“WATCH: The latest videos from the Star”
by CYRUS OMBATI Chief Crime Reporter
News
09 May 2022 - 22:00