The positivity rate now stands at 0.8 per cent.

• Eleven of the cases were reported in Nairobi County and two in Kiambu County.

• No death was reported over that period, meaning the case fatality count remains at 5,649. 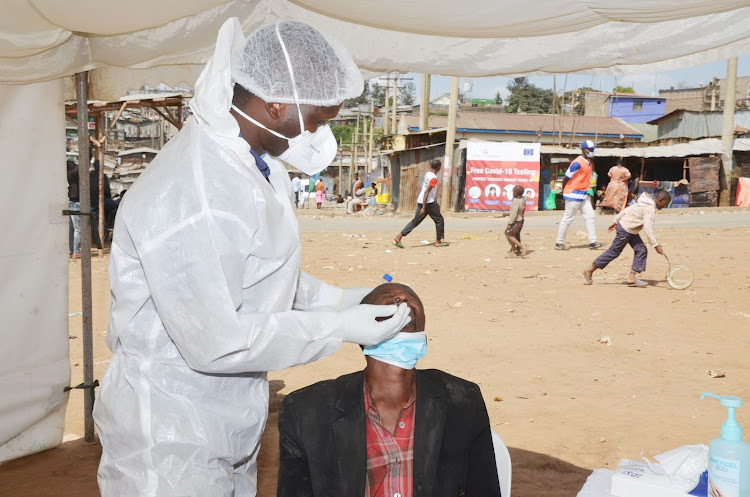 Kenya's Covid-19 positivity rate now stands at 0.8 per cent after 13 people tested positive for the disease from a sample size of 1,619 tested over the last 24 hours.

No death was reported over that period, meaning the case fatality count remains at 5,649.

In a statement on Sunday, Health CS Mutahi Kagwe said eight of the new patients are foreigners while five are Kenyans.

Seven among them are males while six are females; the youngest being an eight-year-old child while the oldest is 71 years old.

Eleven of the cases were reported in Nairobi County and two in Kiambu County.

He said total recoveries now stand at 318,069 after five patients recovered from the disease from the Home Based and Isolation Care.

Of the total recoveries, 53,028 are from various health facilities countrywide while 265,041 are from the Home Based Care and Isolation program.

Kagwe reported that four patients are currently admitted in various health facilities countrywide, while 159 are under the Home-Based Isolation and Care program.

He said no patient is in the Intensive Care Unit (ICU) or in the High Dependency Unit (HDU) but one patient is on supplemental oxygen in the general ward.

This means, the government must vaccinate 9,299,975 people between now and end of December for it to meet the target of vaccinating 27,246,033 people by the end of the year.

The number of people fully vaccinated over that period was 1,457.

"Proportion of adults fully vaccinated was 30.6 per cent," Kagwe said.

Nyeri is the only county that has fully vaccinated over half of its adult population at 52.7 per cent.

Nairobi comes second with 48.3 per cent of its adult population now fully vaccinated.

Marsabit comes last with just 9.7 per cent of its total population having been fully vaccinated over the period under review.

In terms of booster doses, Nairobi has administered the most - 105,098.

No deaths recorded, cumulative number of deaths remains at 5,649.
News
3 months ago

Africa's only Covid-19 plant under threat

Fewer than one in six Africans have had two doses of a coronavirus vaccine.
News
3 months ago
WATCH: The latest videos from the Star
by EMMANUEL WANJALA Radio, Print & Digital Reporter
News
08 May 2022 - 20:46