I have no links with Ruto, says Kalonzo

•Kalonzo said he had not disrespected the panelists picked to identify Raila's deputy by not declining to appear for the interviews as planned.

•He however said there was nothing that can stop him, Raila and Uhuru from resolving the running mate impasse as brothers. 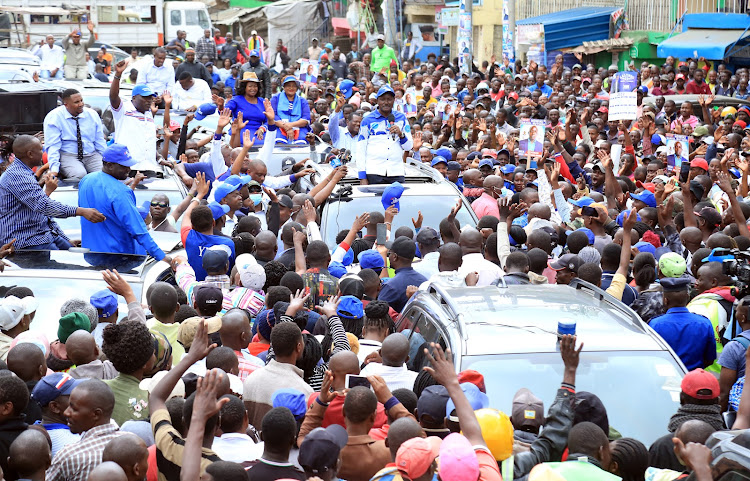 Kalonzo said he is a principled man and does not need UDA or anyone else to lobby for him to be ODM leader Raila Odinga's running mate.

Speaking in Mlolongo on a trip to Mombasa, Kalonzo said he was focused on ensuring Ruto and his team are sent home in the August 9 poll.

“People are trying to stop us because they know if I join hands with Raila they will be sent home. Our agenda is to save this country from corruption,” he said on Thursday.

Kalonzo said he had not disrespected the panellists picked to identify Raila's deputy by not appearing for the interviews as planned.

He said there was nothing that can stop him, Raila and Uhuru from resolving the running mate impasse as brothers.

“I respect the panellists and the council, which I am part of, that is why we agreed to form this coalition but I insisted I will not be subjected to an interview,” Kalonzo said.

Conspicuously missing , however, was Kanu chairman Gideon Moi who was expected to put in an appearance after his extended silence in the coalition’s campaigns.

On Wednesday, Kalonzo told reporters Gideon, who is an Oka principal, would accompany him to drum up support for Raila Odinga’s presidential bid.

It was still unclear why Moi gave the event a wide berth even after writing to Azimio’s selection panel that he had endorsed Kalonzo for the the running mate position.

“The Kenya African National Union proposes and submits the name of Stephen Kalonzo Musyoka as its preferred candidate for the position of deputy president,” Moi said.

“It is our considered opinion, and we strongly believe, that Stephen Kalonzo fits the bill and is the most suitable to deputise Raila Amolo Odinga. It is our sincere hope  this panel will consider and find him appropriate for the position and consequently recommend his selection.”

On the zoning of regions by the coalition, Kalonzo said he is not opposed  but said it should only happen in July when all candidates have campaigned and proven their political strength.

“We have to be careful because we want to bag a majority of the members in the coalition,” he said.

Sonko called on the members of the coalition to avoid spilling the beans about what was being discussed in the bedroom, saying it had given their opponents a platform to freely discuss unguarded.

“This has become a big shame to us and Kalonzo because we are disclosing everything to the public, giving an advantage t our copetitors," Sonko said.

Sabina claimed some people are trying to influence Kalonzo for their own personal gain.
News
3 months ago

"Please pick Kalonzo as your running mate if you care so much for him," Mutua said.
News
3 months ago

DP William Ruto said vetting Kalonzo is humiliating and a show of impunity.
News
3 months ago