•ODM boss says the concept of zoning was not new in the political scenes.

•Many foreign jurisdictions like the United States and the United Kingdom practice zoning. 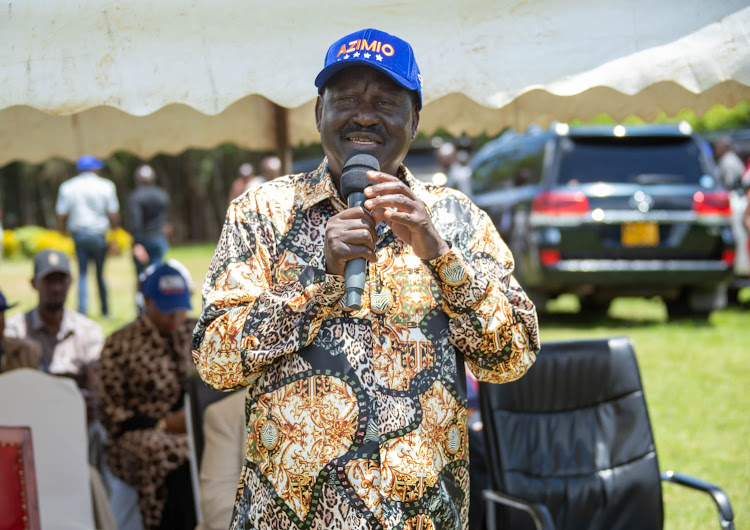 ODM leader Raila Odinga during the engagement with Azimio aspirants in Nanyuki, Laikipia County on Monday, May 2, 2022.
Image: RAILA ODINGA/TWITTER

The Azimio la Umoja presidential flag bearer also implored nomination losers to remain within the coalition, promising they would be considered if he forms the next government.

The former Prime Minister defended the ongoing zoning of electoral areas, saying the desire is to enable the coalition to consolidate the presidential vote.

Raila, while addressing political leaders in Kirinyaga, said the move was to avert instances where internal divisions risked splitting the coalition’s votes to the advantage of Azimio rivals.

“We have to measure the strengths of each candidate and allow those with clout to proceed so that we don’t divide our votes,” he said.

“You form a coalition before an election to consolidate the presidential vote to win the presidency otherwise you will have too many candidates dividing votes and end up with the unlikely persons being elected,” Raila said.

The ODM boss said the concept of zoning was not new in the political scene as the same has worked in many foreign jurisdictions like the United States and the United Kingdom.

“There is no country where a political party has a uniform spread of support. If you go to America, there are red and blue states. In Britain, there are Labour Party, Conservative, and Liberal Party constituencies.”

There has been disquiet among Azimio affiliate parties, some of which have sought to withdraw from the coalition crafted by Raila and President Uhuru Kenyatta.

The Office of the Registrar of Political Parties, in response, said it has no mandate to cause the member parties to withdraw from the coalition.

He cited the case of Nairobi where the coalition members have agreed to share county and MP positions, indicating it would work to the advantage of Azimio.

“There are wards which are shared as well as constituencies. That is how the party is able to get maximum seats in Parliament and County Assemblies,” Raila said.

The ODM leader called for a ceasefire among Azimio affiliates and urged the aspirants to speak with one voice during the campaigns.

“What we have is a friendly match. We want us to bond so that we don’t throw the people away. If you throw them away, the enemy will pick them,” he said.

“They are all members of Azimio. You may not have made it as an MCA, MP, Senator, Woman Rep or governor, but you are still with us. The world will not end with this election, after it is done, we will have a government and you will get something in it,” he added.

He also revealed that the Azimio campaigns would be structured and coordinated.

“I am up there, but I want every county to have committees coordinating campaigns in the constituencies and wards. The county coordinating committee will be in constant communication with the centre (where Raphael Tuju is coordinator),” Raila said.

He said the clamour for the presidency is like a war and needs a united force among the players to save the country from falling in the wrong hands.

“This is a war and a war needs weapons… We will help each other… We don’t want to see those people shouting yet Kenyans are suffering. We must win,” Raila said.

“As you have heard, if those people get a chance, you know where Kenya will be… We don’t want Kenyans to get to that level.”

According to the zoning, Wiper was only left with Embakasi South out of the 17 seats.
News
2 months ago

This is master plan to ensure that they lock Nairobi out of the reach of their Kenya Kwanza rivals
Counties
2 months ago
WATCH: The latest videos from the Star
by MOSES ODHIAMBO Journalist and Political Writer
News
04 May 2022 - 09:11