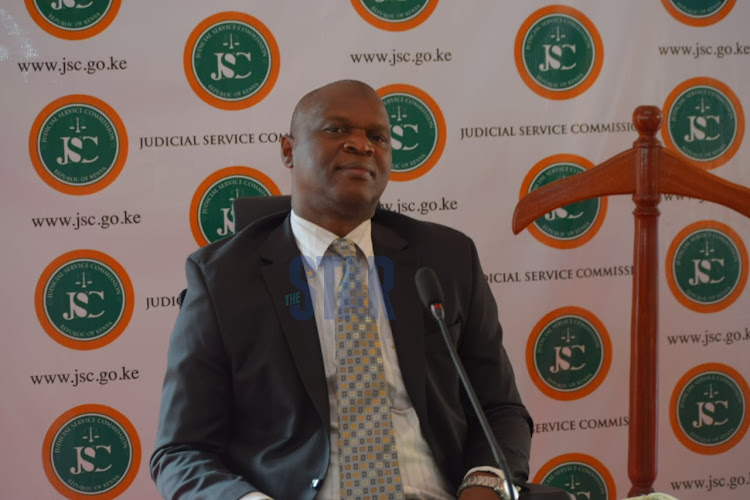 High Court judge Said Juma Chitembwe is staring at an uncertain future after the Judicial Service Commission recommended formation of a tribunal to investigate him for gross misconduct.

Petitioners had last year moved to the JSC demanding the removal of the judge on claims he had taken a bribe to defeat justice.

The JSC, further on its own motion, initiated proceedings for the removal of the judge from office.

In a statement on Wednesday, Chief Justice Martha Koome, who chairs the JSC, said the commission had considered the report of a panel it constituted on its own motion and is "satisfied that the petition discloses grounds for the removal of Justice Said Juma Chitembwe from office."

"Accordingly, the commission resolved to send the petition to the President for his further action in accordance with the provisions of Article 168(1) of the Constitution," Koome said.

The JSC action now sets the motion for President Uhuru Kenyatta to suspend the judge and form a tribunal to investigate his conduct.

The tribunal will recommend whether Chitembwe should be sacked or not.

One of Chitembwe's lawyers criticised the move saying the JSC had acted as both the player and the referee by acting on its own petition.

The lawyer said Chitembwe had not been given time to defend himself against the petition.

Chitembwe has served in the Judiciary for 13 years and he will become the fifth judge to face a tribunal for investigations of misconduct.

Other judges to have faced such a tribunal are Joseph Mutava, Jackton Ojwang, Philip Tunoi and former deputy chief justice Nancy Baraza.

Ojwang’ was cleared after the tribunal declared him innocent. It said the evidence presented against him did not meet the threshold to warrant his removal.

The JSC last year constituted a panel to hear the petitions seeking the removal of Chitembwe from office.

The Commission further on its own motion, initiated proceedings for the removal of the Judge.

The panel after concluding its work presented its report to the full commission for deliberations.

The petitioners were Imgrad Beige and David Leboo (filed as one) and Francis Wambua.

Two others however, chose to withdraw before the JSC last year.

In their letter to the JSC, John Wangai and Stephen Ooko indicated they had no complaints against the judge.

“I wish to confirm that we have no complaint against the honourable Justice Said Chitembwe,” they said.

Kenyatta is required to appoint the tribunal within 14 days after receiving the JSC resolution.

In his petition, Wambua alleged they had tangible and credible information that Amana Jirani received a bribe on behalf of Chitembwe to change the outcome of the case. Jirani and Chitembwe are brothers.

Wambua’s allegations are based on telephone conversations between Chitembwe, former Nairobi governor Mike Sonko, Jirani and other parties which were recorded.

The petitioner said there was a conspiracy to rule against Sonko in petitions challenging his impeachment as governor of Nairobi.

Wambua alleged Chitembwe abused his discretion and rendered dishonest judgements based on outside pressure and influences.

He also accused the judge of confessing to Sonko that the judgment he delivered was faulty for want of public participation in the Senate and that he can criticise the same in the Court of Appeal.

Beige and Leboo alleged the judge had been accused of handling a matter regarding a parcel of land in Kwale county.

Chitembwe who is no stranger to controversy was mid last year summoned by the DCI, following claims that over Sh700,000 was found in his chambers.

Banzi at the time indicated that they received a complaint that some brokers had approached select judges with a view of procuring favourable judgements.

"On July 21 at around 3pm, I was told by one of the complainants that after a series of meetings between certain judges and brokers a figure of Sh7 million was arrived at and the bribe was to be delivered to the residence of a judge at 7pm," Banzi said.

Chitembwe, 55, has also been charged and prosecuted over allegations of embezzlement of funds at the NSSF when he was the company secretary.

He was later acquitted. When he appeared before a panel for interviews to become Chief Justice last year, an emotional Chitembwe said he did not understand why the court took 30 days to give a bail ruling in the corruption case.

“It’s the wearer of the shoe that knows, but mine cannot be a bad example because we were heard in one year and the magistrate ruled there was no case to answer,” he told the panel.

The Commission has written to President Uhuru Kenyatta for further action.
News
9 months ago

Nyasimi asked Koome to take over the case and prioritise it.
News
1 year ago

Owoko said he withdrew his petition to save his co-petitioner from fear.
News
1 year ago

Awarded PhD in peace and conflict relations.
Counties
1 year ago