Panel now says meeting would only be available for those wishing to give a presentation before the team.

•Sources aware of the panel’s operations told the Star the team will do a comprehensive boardroom analysis of the candidates.

•The panel, which had its inaugural meeting on Wednesday, said only affiliate parties will submit names of their preferred nominees. 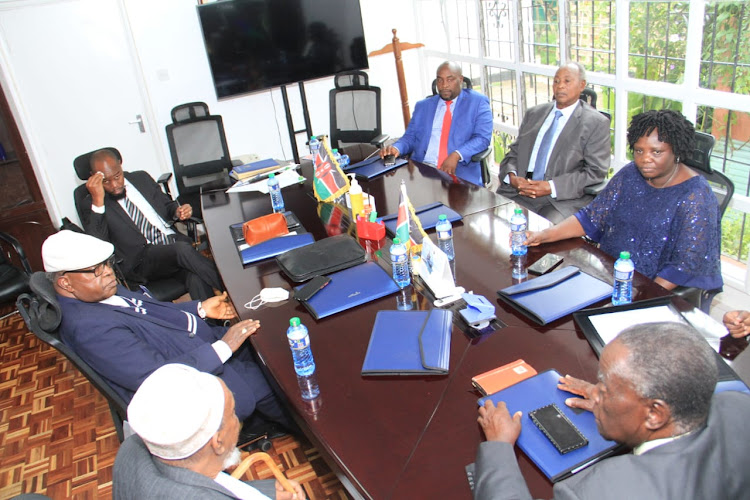 The seven-member panel to pick ODM leader Raila Odinga's running mate now says it's not mandatory for its coalition bigwigs to physically appear for interviews to get the job.

In what appears to be responding to pressure from Wiper leader Kalonzo Musyoka and his brigade, the panel now says interviews would only be available for those wishing to give a presentation before the team.

However, in a statement on Monday, the coalition had said all the candidates must appear before the committee.

“All the eminent Kenyans being considered for this position will be meeting the selection panel on various days between May 4 and 10,” panel secretary Elizabeth Meyo said

However, the move was strongly opposed by Kalonzo’s camp terming it as public humiliation of the former Vice President who has twice been Raila’s running mate.

On Tuesday, the Wiper boss ruled out being party to any process that would make him appear before the panel as an interviewee.

“I will not attend the said process. I find the entire thing demeaning to my person and will therefore distance myself from it,” Kalonzo said.

So politicised was the interview proposal that on Wednesday Deputy President William Ruto waded into the debate terming it disrespectful and impunity of the highest order.

“To subject Kalonzo to some humiliating interview is impunity. We must unite to eliminate the culture of political deceit, the hallmark of some politicians. Whatever the circumstances every leader deserves some dignity and respect. Heshima si utumwa,” he tweeted.

Sources aware of the panel’s operations told the Star the team will do a comprehensive boardroom analysis of the candidates.

It will also commission opinion polls to arrive at a suitable candidate.

The development is a huge win for Kalonzo’s team who had threatened to disengage from presidential campaigns in protest of the mistreatment.

“The committee will avail the opportunity to any candidate who wishes to make any presentations to the members of the committee a chance to do so,” Noah Wekesa said.

The panel, which had its inaugural meeting on Wednesday, said only affiliate parties submit names of their preferred nominees - vacating the position that interested aspirants were to make applications to the panel.

“The committee shall only consider candidates who are members of the constituent party members of the Azimio la Umoja One Kenya Alliance,” Wekesa said.

“The committee requests any constituent party members of the Azimio la Umoja One Kenya Alliance that wishes to nominate any person for consideration as a candidate for the position of Deputy President of the Coalition to submit the name of such person by close of business tomorrow May 5.”

This means 26 Azimio parties must move with speed to within 24 hours forward names of potential running mate candidates in their midst to the panel which has exactly five days to submit two names to Raila for consideration.

Pressed for time, several Azimio parties Wednesday convened informal meetings to deliberate on the possible names to submit to the panel before the 24-hour window elapse.

The Committee said they will only pick Raila's deputy from parties under Azimio.
News
9 months ago

The Wiper boss is at the crossroads on whether to submit to the seven-member panel or not.
News
9 months ago

Kalonzo camp dismisses the panel, saying it has no authority.
News - Page 8
9 months ago