The curfew is to allow the security forces deal with criminal activities there.

•Matiang'i said the curfew is to allow the security forces deal with the ongoing  criminal activities there. 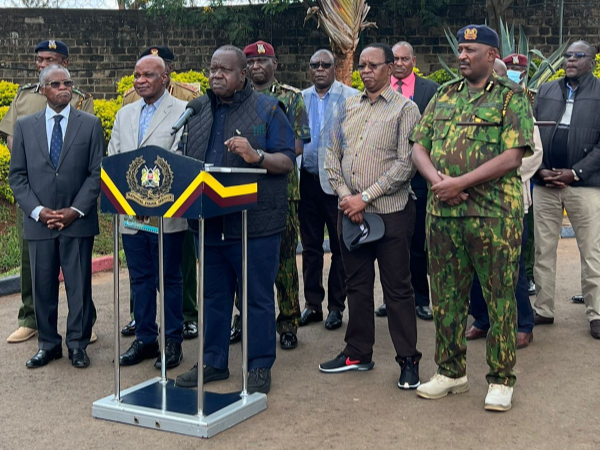 He also said the Komu sub-county in Isiolo County and Sololo area near the Kenya-Ethiopia border will also be affected by the dusk to dawn curfew.

“Effective from 6 pm on May 2 we have placed the whole of Marsabit County under curfew to be followed by an operation to rid of illegal guns causing havoc there. Leaders in the area are urged to cooperate,” he said.

The CS said they had in the past week mobilized enough personnel for the operation and they are already on the ground ready for the same.

He said the operation and curfew will run for 30 days and the curfew will be between 6 pm and 6 am.

Matiangi said the operation may be extended until they get rid of the Illegal weapons causing havoc there.

He blamed the insecurity in the area on some leaders who are arming their militias from their clans.

The announcement was made at the General Service Unit after a meeting attended by interior Principal Secretary Karanja Kibicho, Inspector General of police Hilary Mutyambai, his deputy Edward Mbugua, GSU commandant Douglas Kanja, chairman of National Cohesion and Integration Commission and other top officials.

Officials said special forces are among those on the ground to conduct the operation to also affect Komu sub-county, Merti, in Isiolo and parts of Sololo near the border.

This is because of fears some terror groups are using the area as a route to transport their weapons for attacks in other places like Nairobi.

“We have noticed the nexus between the proliferation of the guns in Marsabit and the chaos in Komu where there are illegal mining activities ongoing there.”

The mining activities, he said are funding some of the illegal activities in the area and will now be dealt with.

The area has been experiencing chaos with gunmen roaming there leaving dozens dead and injured.

The government had given the locals three months to come up with a solution or an operation to be launched in the biggest county.

But the attacks have persisted. Last Thursday, six people were killed and four injured in an ambush by gunmen in Laisamis.

Seventeen others who had gone missing were rescued 24 hours later.

The attackers have been attacking people in among other places Marsabit town with impunity which has forced the government to move in with the operation.

The CS said more than 25 per cent of national government resources are committed to securing the areas.

“The situation is aggravated by politics of expansionism, drought, rough and vast terrain and proliferation of arms sneaked in through porous borders.”

"Political instability and troubles in neighbouring countries also make it easy to access weapons,” he said.

The CS said the perpetuation of retrogressive practices such as cattle rustling and moranism worsens the conflict.

He however said the government is investing in infrastructure such as roads, water pans and dams to open up the region and encourage more settlements.

Matiang'i also said leaders in the counties should engage more in people-driven and peacebuilding initiatives.

Marsabit is among areas classified as hotspots ahead of the August polls due to inter-clan fighting.

Tens of people have in the past months been killed in what is seen as a political game to control local resources.

On February 22, President Uhuru Kenyatta gave Marsabit leaders two weeks to come up with a lasting solution to the communal conflicts that have bedevilled the county.

However, the situation is yet to stabilise.

The President said if the leaders failed to find a strategy to stop the conflicts, he will push the government to deploy security agencies with strict instructions to forcefully end the insecurity.

Uhuru said Marsabit leaders are out to change their approach and work together to promote unity instead of fuelling conflicts among residents.

They went missing after an ambush on government officials that left five dead.
News
7 months ago