Eligible candidates must demonstrate, in word and deed, their fidelity to leadership and integrity

•Wiper leader Kalonzo Musyoka had protested the idea of appearing before the vetting panel.

•Meyo announced that the process to pick Raila's number two would be finalised by May 10. 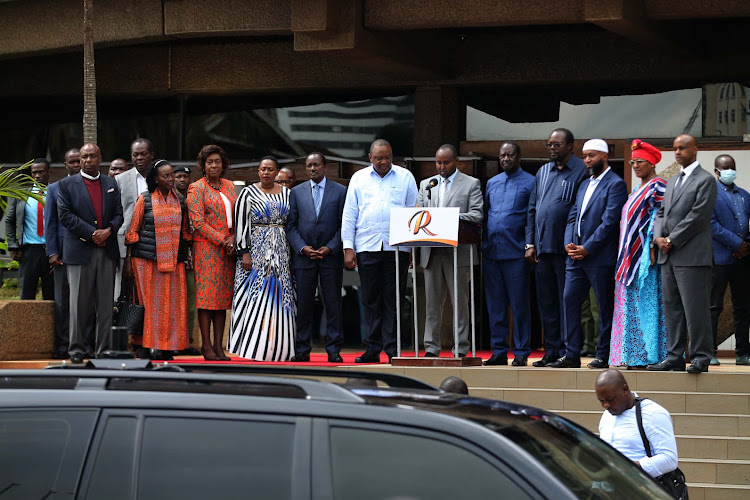 Persons seeking to be ODM leader Raila Odinga running mate in the August 9 election will be subjected to grilling to determine their suitability.

The candidates being considered for the position are expected to appear before the 7-member selection panel unveiled last week.

“All the potential candidates that will be considered will be eminent Kenyans with demonstrated record of public leadership and service.”

Meyo announced that the process to pick Raila's number two would be finalised by May 10.

"Thereafter, the successful candidate shall be unveiled to the public by the Rt Hon Raila Odinga,"Meyo said.

According to IEBC timelines, presidential aspirants have until May 16 to unveil their running mates.

“Raila Odinga is giving this process mandated by the coalition's supreme body the seriousness it deserves," Meyo said.

“The panel appreciates the humility of eminent persons for agreeing to be part of this noble process."

The announcement came in the wake of the protest by Wiper leader Kalonzo Musyoka, who has questioned why he has to be subjected to an exam to be Raila's deputy.

“This issue is beginning to weigh heavily on me. I find it almost unacceptable discussing it. …. If this issue is solved earlier, it will give some of us the impetus to campaign,” Kalonzo said last week

"Right now, it is the kind of thing [the push and pull over a deputy] that makes me want to go home, to be honest. You all know my history. Should I really be struggling about this?”

Kalonzo’s men are equally against the vetting process saying such a system has never worked.

“This is a system borrowed from the United States, under the influence of Prof Makau Mutua. It will not work here because our election is determined by numbers and tribal arithmetic,” Makueni MP Daniel Maanzo said.

But the panel has scheduled sittings with the applicants starting this week Friday setting the minimum qualifications of the interested parties.

The panel says the applicants would be required to demonstrate their fidelity to the Constitution of Kenya 2010.

“…with particular emphasis on the qualification for nomination as a deputy presidential candidate,” a press statement by the panel reads in part.

The team also said the candidate must ‘demonstrate in word and deed’ that they meet the requisite cut for the job.

Among attributes, a candidate who demonstrates respect for the people and brings honour to the nation and dignity to the office.

The team says it would also be looking for a person who “promotes public confidence in the integrity of the office.”

“…and demonstrates the value that nomination to the office is a responsibility to serve the people, rather than the power to rule them,” Meyo said.

She added that the eligible candidates must demonstrate, in word and deed, their fidelity to leadership and integrity.

This would be assessed against their personal integrity in public and private life, objectivity and impartiality in decision making.

Also in ensuring that decisions are not influenced by nepotism, favouritism, other improper motives or corrupt practices.

The team says it would also factor an individual’s proof of selfless service based solely on the public interest, accountability for decisions and actions, discipline and commitment in service to the people.

These are serious Kenyans, the analyst holds
News
9 months ago

Kalonzo camp dismisses the panel, saying it has no authority.
News - Page 8
9 months ago