The CS thanked the international partners who helped cushion Kenyans.

• Labour CS noted on the setting up of temporary recuse homes in the diaspora for Kenyans.

• He appealed to all the newly elected leaders from the trade unions to work in the interest of the public and not their own interests. 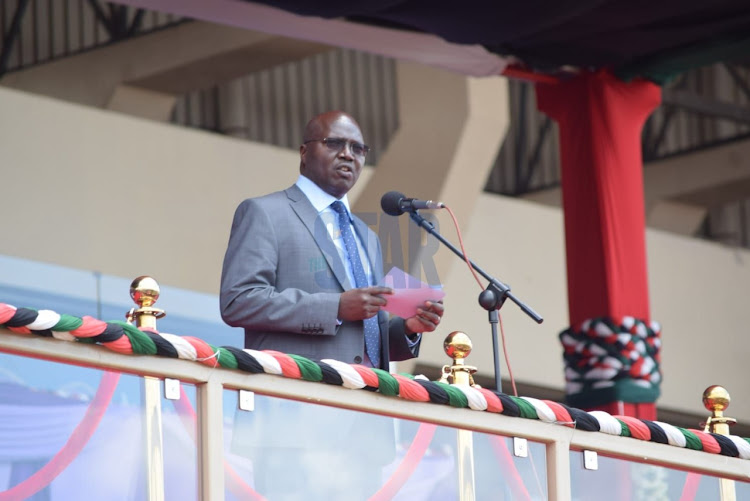 Labour CS Simon Chelugui speaking during the marking of labour day celebrations at Nyayo Stadium on May 1, 2022.
Image: CHARLENE MALWA

Kenyans on Sunday joined the rest of the world to celebrate World Labour Day at the Nyayo National Stadium in Nairobi.

Today, workers would ordinarily throng Uhuru Park, not only to celebrate their input into the economy but also to listen to an announcement from the government regarding a minimum pay rise at such difficult time when almost all food stuffs and other items price have increased.

The Kenya National Bureau of Statistics (KNBS) data released on Thursday shows that inflation hit a seven-month high of 6.74 per cent in April, from 5.6 per cent in March.

This year’s celebration will be far different as it comes a day after Kenya’s third President Mwai kibaki was laid at his home in Othaya.

The CS thanked the international partners, ILO, WFP and the EU,  who helped cushion Kenyans when it was at the steep of the pandemic.

"We had to put interventions like working from home protected workers from the pandemic," Chelugui said.

“We have just started recovering from the effects of the pandemic, and my hope is that we do not do anything that will disrupt this."

He appealed all the newly elected leaders from the trade unions to work in the interest of the public and not their own interests.

Chelugui recognised the effort of Kenyans in diaspora not only in diaspora remittances, and technology and skills transfer but also in being the most valued ambassadors of our country.

The CS noted that the ministry is addressing the issue of labour migration and ethical recruitment that saw the Cabinet approve the setting up of temporary rescue homes to respond to the interest of migrant workers in distress.

Also, Chelugui noted that the Cabinet approved the posting of labour attaches to the diaspora and approved the migrant worker's fund.

The CS thanked the president for protecting workers during the pandemic through the reduction of pay as you earn, stipend for those who lost jobs and reduction of VAT.

He also urged Kenyans to maintain peace during the coming elections.

“We have just started recovering from the effects of the pandemic, and my hope is that we do not do anything that will disrupt this," he said.

The event was attended by President Uhuru Kenyatta.

Uhuru is expected to lead the celebrations at Nyayo Stadium.
News
2 months ago

Atwoli on Saturday said the function will be purely about workers.
News
2 months ago
“WATCH: The latest videos from the Star”
by MARGARET WANJIRU Health & Lifestyle Journalist
News
01 May 2022 - 16:40