Kibaki final journey: Body on the way to Othaya by road

The transportation of the body by road is part of Kibaki's wishes.

•The body is expected to arrive at Othaya approved school the, venue of the burial service.

•The transportation of the body by road is part of Kibaki's wishes before he passed on. 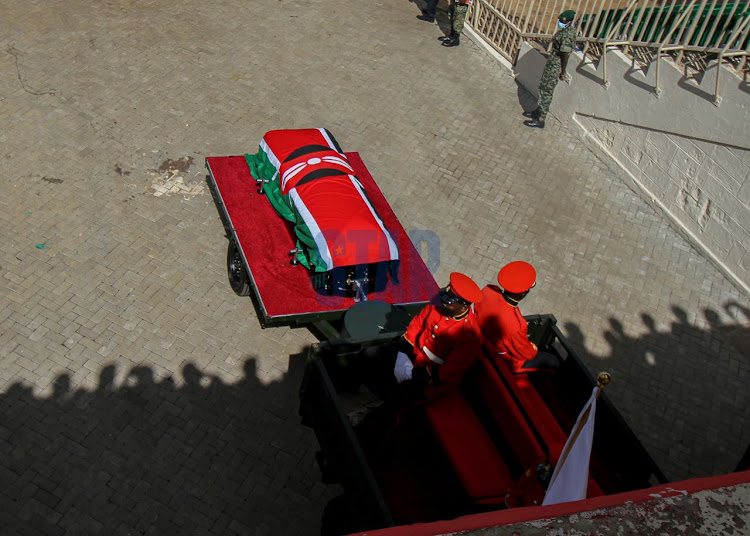 Military gun carrier with Casket bearing the body of the late former President Mwai Kibaki leaving Nyayo Stadium after the conclusion of the State funeral on April 29,2022.
Image: ENOS TECHE

The late's remains were draped in the national flag, loaded in a hearse carriage and escorted by military officers in a presidential-like procession.

The body will later be loaded into a gun carriage about 400 metres to the burial service venue.

Kibaki's family is part of the procession.

Officers in the rank of a colonel are the pallbearers.

Close to 15,000 people are expected to attend the burial service.

They include at least three heads of state, representatives of various countries and several dignitaries are expected to attend the event.

In Othaya, already, members of the public have started streaming in at Othaya approved school where the funeral service will be conducted before the body is ferried to his home for a private burial.

The body is expected to arrive at Othaya approved school the, venue of the burial service, by 10 am.

The burial service is expected to begin at 10 am.

The transportation of the body by road is part of Kibaki's wishes before he passed on.

The late Kibaki will be interred at his Othaya home in a private ceremony after the family requested so.

He will be accorded military honours complete with 19 gun salutes.

The gun salute is in honour of his role as a five star general and the commander in chief of Kenya's defence forces.

After the body will be lowered to the grave, President Uhuru Kenyatta will lead a minute of silence in honour of the late.

He will not be buried with the National flag. The flag will be handed to the family after he is laid to rest.

Father taught us to be grateful - Jimmy Kibaki

He urged Kenyans to do their best to excel as an honor to the third Commander in Chief.
News
2 months ago
“WATCH: The latest videos from the Star”
by BOSCO MARITA AND JULIUS OTIENO
News
30 April 2022 - 07:01