One victim was shot dead as he pursued stolen animals.

• George Chebor was ambushed and shot dead at Ngaratuko village in the first incident as he pursued his stolen cattle at Lemuyek, on the Baringo North-Tiaty sub-county border at around 2 pm.

• The body was still lying at the scene by the time of going to press on Thursday. 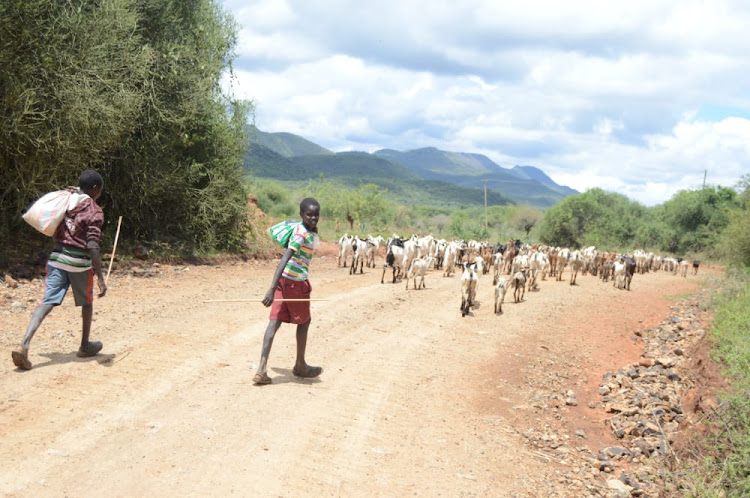 Three people were killed and one seriously injured in two separate bandit attacks on Wednesday in the Baringo North sub-county.

George Chebor was ambushed and shot dead at Ngaratuko village in the first incident as he pursued his stolen cattle at Lemuyek, on the Baringo North-Tiaty sub-county border at around 2 pm.

"He was shot on the back and head and he died on the spot," area resident Richard Chepchomei said on Thursday.

The body was still lying at the scene by the time of going to press on Thursday. Tension remains high in the area.

In the second incident, a herder, Francis Changwony was shot and seriously injured as he pursued armed bandits.

He is currently being treated at the County Referral Hospital in Kabarnet town.

The bandits made away with 34 cows and 55 goats during the attack.

Baringo North OCPD Fred Odinga confirmed the incident saying the locals with the help of police officers managed to recover only five cows.

"Our officers are currently on the ground pursuing the bandits to recover the remaining stolen animals," Odinga said.

On Thursday morning, the bodies of two other men, one identified as Stephen Chelal, were found lying in a pool of blood in the Chebilat area, near the Loruk-Marigat highway.

The bodies had gunshot wounds.

"Investigation is still ongoing to ascertain if the deaths are linked to banditry or highway robbery," Odinga said.

More than 30 people have been killed, thousands displaced and hundreds of livestock stolen by bandits in Baringo county since last December.

Locals have continued to appeal to the government to urgently address the runaway insecurity in Baringo North and Baringo South sub-counties.

"We are being killed by bandits like rats yet we still believe we are in an independent and peaceful country. Where is the government?" posed Chepchomei.

In February, the government deployed 30 National Police Reservists (NPR) to Baringo North and 70 in Baringo South.

"But the number is still too small to tackle the numerous armed bandits," Chepchomei said.

County Commissioner, Abdirisak Jaldesa, had earlier urged the locals to stay calm and assured them that the government has put up measures to end banditry.

"We are committed to restoring peace and resettling the displaced victims of the attacks," Jaldesa said.

In eight months, bandits have killed more than 120 people in Elgeyo Marakwet, Baringo, West Pokot, Samburu and parts of Turkana
News
8 months ago