His remarks come after Raila announced a 7-member panel to advise on his running mate pick.

• He insisted that Kalonzo should not subject himself to ridicule by accepting to vetted to determine his suitability to be Raila's running mate.

• His remarks come a day after Raila announced a seven-member panel to advise on who he will pick as his running mate. 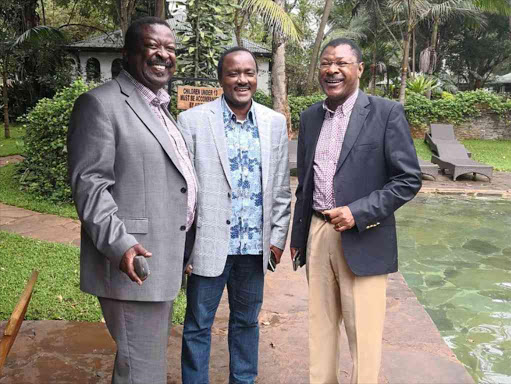 Wentang'ula termed the exercise as an embarrassment to a person of Kalonzo's stature.

The Ford Kenya leader said the former vice president will be subjecting himself to ridicule in the event he takes part in the vetting.

Wetangula divulged that the Wiper party leader has previously served as vice president for five years and ran as Raila's running mate twice, ostensibly saying he is qualified even without being vetted.

"Don’t subject yourself to humiliation, ridicule and odium by being interrogated as to “suitability” for the same role/job," Wetang'ula tweeted on Thursday.

His remarks come a day after Raila announced a seven-member panel to advise on who he will pick as his running mate.

In a statement on Wednesday, Azimio Council secretary-general Junet Mohamed said the panel members have agreed to take up the roles and deliver their new mandate.

The panel consist of the clergy, former veteran politician and representatives of political parties.

"The panel shall reach its decision through consensus and shall elect its chairperson. The secretary of the panel shall be Ms Elizabeth Meyo."

The panel has up to May 10, to submit the name of a person suitable for the seat of the running mate.

On Wednesday,  Kalonzo Musyoka said without him as running mate, Raila will lose to Deputy President William Ruto.

The Wiper boss said he and Raila are a winning team, warning that if Azimio does not get it right with the running mate issue, Ruto and his Hustlers will win.

Kalonzo, who had first demanded he be the flagbearer, then insisted on being running mate, also said the jostling over the deputy positions makes him want to go home.

Speaking to the media at the SKM Command Centre in Karen, Nairobi, the former Vice President asked why he should be subjected to an "exam" or vetting by a panel for the seat.

It is supposed to identify the best person or persons to deputise Raila.

“This issue is beginning to weigh heavily on me. I find it almost unacceptable to discuss it. …. If this issue is solved earlier, it will give some of us the impetus to the campaign,” he said.

The panel has until May 10, to to submit potential candidates for running mate.
News
3 months ago