Kibaki promised to support me as his successor, says Kalonzo 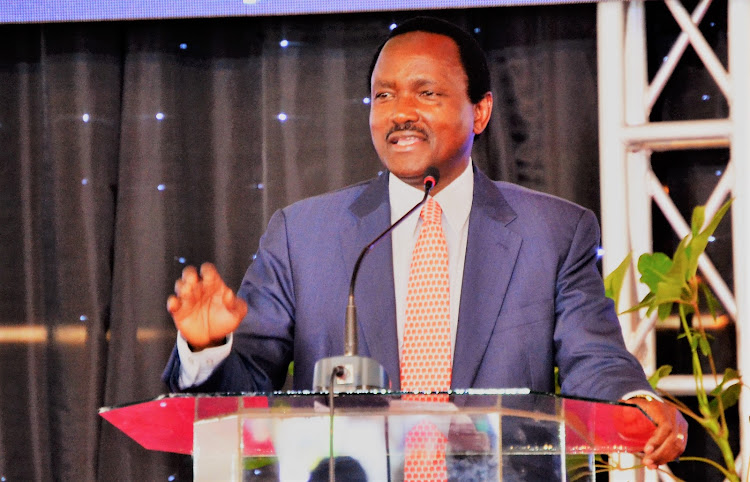 Former vice president Kalonzo Musyoka has revealed that former President Mwai Kibaki had promised to support him as his successor when he retired in 2013.

However, the political dynamics brought about the ICC cases against Uhuru Kenyatta and William Ruto, now President and Deputy President respectively, altered the plan.

“I believe had the ICC case been dropped, President Kibaki would have supported me. But the need to salvage the situation, manage high emotions is what derailed initial Kibaki intention,” he said.

Kalonzo, who was Kibaki’s last VP, spoke to journalists at his SKM Command Centre in Karen, Nairobi.

The wiper boss opened up on his relationship with Kibaki, the circumstances that led him to accept the second in command position at the height 2017 violence and the struggles in the grand coalition government.

Kalonzo described Kibaki as a humble, great, firm leader and an iconic leader whom the country will miss dearly.

“There are few leaders even in the African continent with the spirit of selflessness and singular sense of purpose to their people,” he said.

For the first time, Kalonzo revealed his team, led by the then senators Mutula Kilonzo (Makueni) and David Musila (Kitui), and his Machakos counterpart Johnson Muthama, initiated the talks for a coalition between ODM-Kenya and PNU.

Former ministers John Michuki and Amos Kimunya represented Kibaki’s wing in the delicate talks that ‘stabilised’ the country, he said.

“That position [of the VP] was a negotiated position. People were approaching each other, particularly that the country was also burning and there was need to stop bloodletting,” he said.

In the 2007 polls, Kibaki was controversially declared as the winner of the presidential election, plunging the country into a widespread violence.

Kalonzo said as a result of the negotiations, he was honoured to become Kibaki’s VP, a decision he said stabilised the country.

“When I came in with close to my one million votes, it stabilised Kibaki’s win. And before the likes of Koffi Annan came, we had stabilised the nation,” he said.

Kalonzo also said the grand coalition government faced turbulence in the early days as he and Raila, who was the Prime Minister, constantly fought over who was Kibaki’s second in command.

“I remember one time; I think it was on Jamhuri Day. Normally, the motorcade would come from State House. The question was who should go immediately after President Kibaki in order to receive him. Was it going to be me or was it going to be Raila,” he said.

The wrangles also erupted in Parliament on who between him and Raila would be the leader of government business.

"In the sharing of real power, my brother felt he was the Prime Minister, and that the vice president should be the leader of official government business. That is where real power is shared," he said.

He said Kibaki took his advice to appoint Uhuru as deputy Prime Minister, despite him coming from his Mt Kenya backyard.

To demonstrate his humility, Kalonzo narrated how Kibaki rejected the suggestion to name Thika Superhighway after him.

“He asked us, does that road not lead to somewhere? That is how that issue ended,” he said.

Yesterday, Kalonzo disclosed he rejected an offer by Uhuru and Ruto to serve as Speaker of the National Assembly.

Kalonzo narrated how selfish people close to Kibaki stopped him from implementing the Narc MoU that led to acrimonious split of the alliance and the eventual chaotic 2007 general election.

Kalonzo said his combination with Raila is a sure way to the presidency.
News
2 months ago

The leaders affirmed that Kalonzo is the suitable candidate for the seat.
News
2 months ago

The Wiper boss has told his party members that God will perform a miracle.
News- Page 2
2 months ago
“WATCH: The latest videos from the Star”
by JULIUS OTIENO Journalist, Political and Parliamentary Reporter
News
27 April 2022 - 23:00