• The party said that the Kamba community is the second largest voting bloc in Nairobi, and they cannot be relegated to a few seats.

• The chairperson said Wiper is fronting Kalonzo Musyoka to be the Country’s Vice President under Azimio. 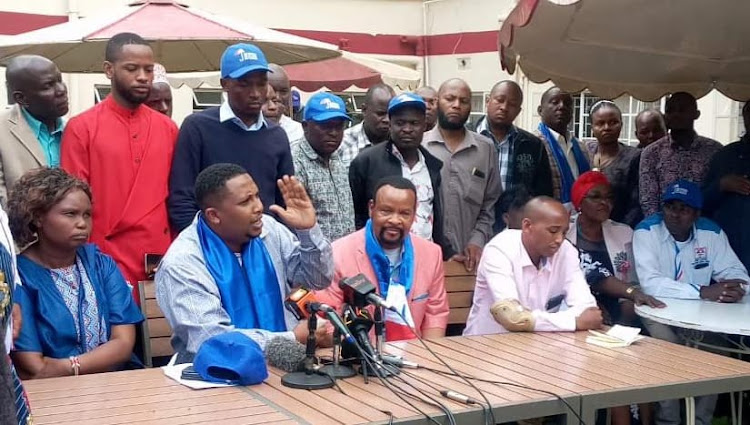 The Wiper Party has rejected a move by Azimio La Umoa One Kenya Coalition Party to zone Nairobi County ahead of the August 9 election.

He said that the Kamba community is the second largest voting bloc in Nairobi, and they cannot be relegated to a few seats.

“There was no communication about MPs. We saw reports on social media that Wiper had only one seat. Our vote decides who becomes Governor, Senator and Woman rep. We are going to field candidates for MP seats in Makadara, Embakasi East, Kasarani , Kamukunji , Mathare, and Embakasi South ,” Kivusyu said.

The chairperson said Wiper is fronting Kalonzo Musyoka to be the Country’s Vice President under Azimio.

“For the position of deputy President, we demand that Kalonzo be given the ticket. He has twice supported Raila Odinga and they won. As Wiper, we must be given the running mate slot because Kalonzo will bring to Azimio more than 2.5 million votes,” he said.

In the zoning, Wiper bagged the Embakasi South seat with Julius Mawathe as its candidate.

According to the zoning, Wiper was only left with Embakasi South out of the 17 constituencies.

The Azimio top leadership said the zoning was a master plan to ensure that they lock Nairobi out of the reach of their Kenya Kwanza rivals.

This comes a week after ODM secretary general Edwin Sifuna said the zoning was agreed to ensure both Jubilee and the Orange party got eight constituencies and Wiper got one.

However, Wiper has rejected the move, insisting that it will field candidates in six.

The party added that in February, Azimio presidential aspirant Raila Odinga hinted that the coalition could opt to zone the country to enable each outfit in the coalition to ring-fence its strongholds.

‘“We do not want a situation where we compete and divide our votes which will enable the rival party to win,” he said.

He said that Gakuya’s choice means the dreams of former county executive Janet Ouko, and Sportspesa CEO Ronald Karuri who are eyeing the seat have been silenced.

However, Waweru was among the 24 new envoys President Uhuru Kenyatta appointed and was announced to be the consul general of the Democratic Republic of Congo.

“Mark, David Mwenje’s son getting the Jubilee ticket means ODM aspirant Kennedy Odhiambo, who was seeking the seat has been locked out.”

The leaders affirmed that Kalonzo is the suitable candidate for the seat.
News
5 months ago