Wetangula: It is time we name a national icon after Kibaki

Kibaki died at the age of 90 at his home in Othaya, Nyeri County.

• Wetangula described Kibaki as a man who was not born great but acquired greatness through sheer hard work.

• The senator added that Kibaki was a man who believed in equity in the distribution of resources. 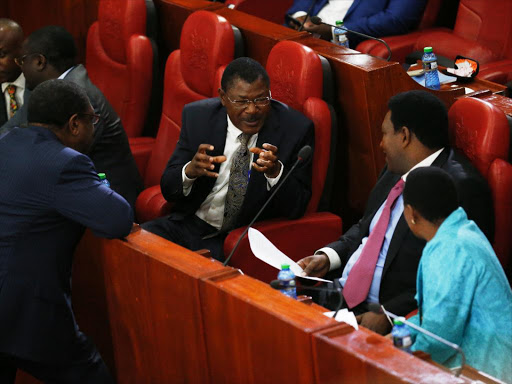 Senator Moses Wetangula (C) with Amos Wako, Ledama Olekina, Judy Pareno after they were sworn in on August 31, 2017./JACK OWUOR

Senators on Tuesday paid tribute to the late former President Mwai Kibaki who was pronounced dead by President Uhuru Kenyatta on Friday.

Kibaki died at the age of 90 at his home in Othaya, Nyeri County.

In his tribute, Bungoma Senator Moses Wetangula described Kibaki as a man who was not born great, but acquired greatness through sheer hard work, commitment and patriotism for his country.

Wetangula noted that the late Kibaki was not selfish by virtue of being against the idea of public infrastructure projects being named after him.

"We have many places that should be named after him. In fact, Senator Samuel Poghisio should bring a motion in this House, so that we name some national icons, one or two or three after this great man," Wetangula said.

Wetangula added that Kibaki brought a working culture to Kenyans and preached that one did not have to steal to be rich.

The Bungoma senator said Kibaki ensured the economy is steady and basic necessities are available for them.

He added Kibaki believed in equity in distributing resources across the country.

"Even as he did not go to many places, Mzee Kibaki would always ask his ministers, you've brought this project about this area, what about those other areas?"

Senator Ephraim Maina eulogised Kibaki as a man who declared zero tolerance for corruption and who he did not spare even his closest friends.

The CS described Kibaki as an astute golfer and icon of the sport.
Sports
3 weeks ago

Kibaki taught us the culture of saving - Igathe