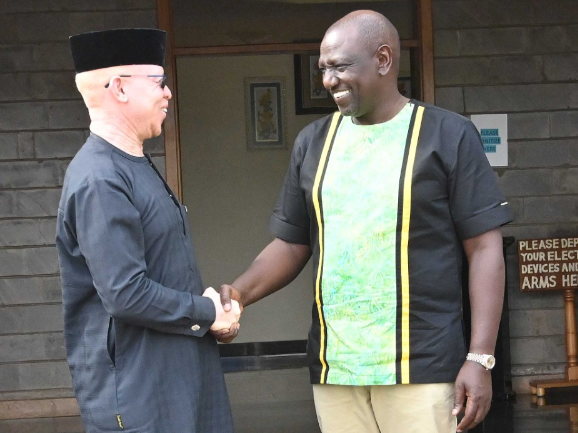 Deputy President William Ruto has announced that Nominated Senator Isaac Mwaura will be in charge of the Kenya Kwanza Alliance campaign team in Kiambu county.

“I wish you well in your new role as a team leader in Kiambu County and also in the community of people living with disabilities,” Ruto said.

This comes after the senator accepted the outcome of concluded UDA nominations in Ruiru Constituency, Kiambu County, where he lost.

The incumbent MP Simon Ng'ang'a emerged winner of the primaries after garnering 10,900 votes. Mwaura got 4,632 votes.

The MP had claimed the exercise was unfair and demanded a repeat.

Mwaura had called upon UDA party leader Ruto to resolve the issue and direct a fresh nomination exercise.

"We have built this party, we feel the pain," he added.

Kosgey was eying the Nandi Senate seat while King'ang'i was seeking to defend his seat on a UDA ticket. They both lost the primaries.

“Your acceptance to work with the winners Samson Cherargei and Genesio Mugo is a show of true leadership. I welcome you to the National Campaign,” Ruto said.

He wants the nomination exercise to be repeated.
News
1 month ago

Aspirants who lost the party ticket for governor did not accept the results
Counties
1 month ago
WATCH: The latest videos from the Star
by KEVIN CHERUIYOT Online Journalist
News
25 April 2022 - 19:28