The former PM left the country on Friday for a week-long trip of the US.

• Onsarigo said he will return to the country on Wednesday.

•Raila left the country on Friday for a week-long trip of the US. 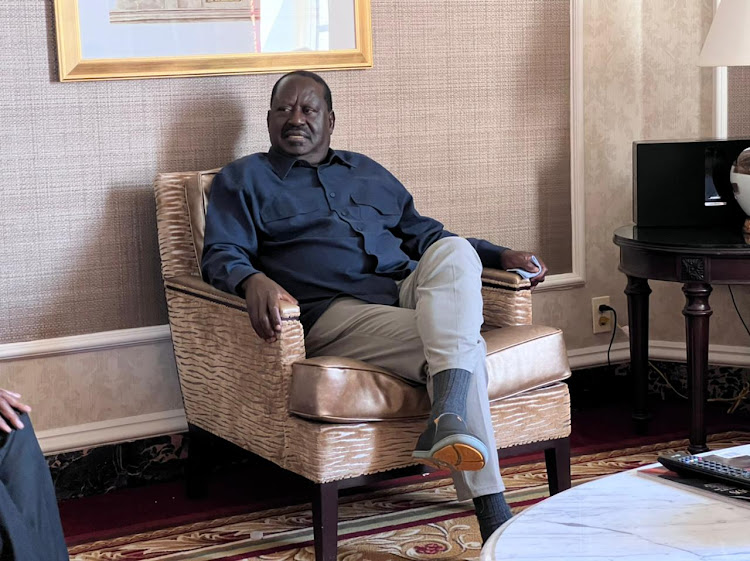 Raila Odinga during his trip of the United States.
Image: RAILA ODINGA/TWITTER

In a statement, his Presidential Campaign Secretariat's Press secretary Dennis Onsarigo said he will return to the country on Wednesday.

"Azimio la Umoja- One Kenya Coalition flag-bearer Raila Odinga will cut short his ongoing US trip and travel back home on Wednesday ahead of the state burial of the former President Mwai Kibaki," he said.

Raila left the country on Friday for a week-long trip of the US.

"Party leader Raila Odinga this afternoon departed for the US for a one-week official visit. We wish our Party Leader and his entourage safe skies," the ODM party tweeted.

His departure from the country came shortly after he unveiled the Azimio La Umoja One Kenya Alliance dream team for Nairobi.

Raila was expected to have meetings with the US Chamber of Commerce, the US State Department for the National Security Council and also the Kenyan Diaspora community.

He also planned on meeting various technology giants at Silicon Valley, San Francisco with a vision to promote IT and technology relations between the two states.

On Sunday, the former PM met Kenyans living in Washington DC for a town hall meeting.

Raila meets Kenyans in Washington DC during US tour

Engagement to be followed by a Tuesday meeting with top US administration officials.
News
2 months ago

Raila left for a one-week long visit to the US in the company of his entourage.
News
2 months ago
WATCH: The latest videos from the Star
by BRIAN ORUTA Digital Journalist
News
25 April 2022 - 12:12