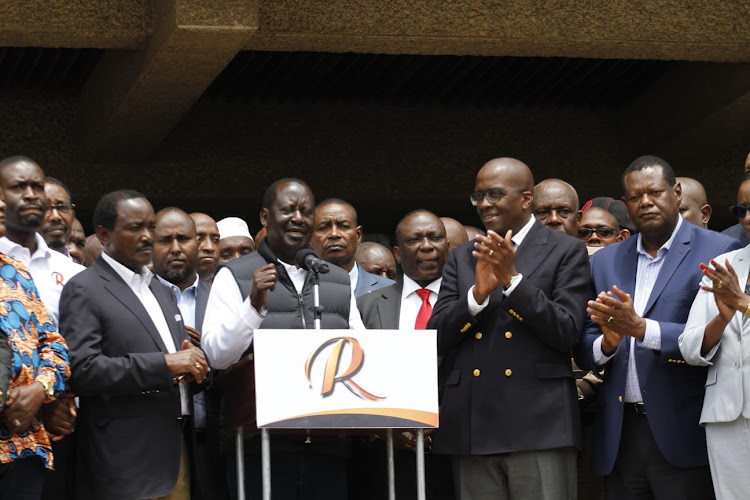 The Azimio-One Kenya Alliance has officially unveil its political lineup for Nairobi City County ahead of the August 9, General Election.

KNCCI president Richard Ngatia also stepped down from the race and will be appointed President Uhuru Kenyatta’s special envoy for trade.

Ngatia will be appointed as President’s Special Envoy on Trade .

The new Azimio lineup will now face the Kenya Kwanza Alliance team on the ballot which is led by Senator Johnson Sakaja as the Gubernatorial candidate, Bishop Margaret Wanjiru as the senator and Millicent Omanga who is vying for Woman Rep.

Sakaja is also set to unveil his deputy governor aspirant next week.

The Azimio-One Kenya Alliance council members arrived at KICC at around 10 am to unveil the lineup. They retreated for a meeting prior to the announcement.

Earlier on, Wanyonyi and Ngatia held a press briefing at Serena Hotel, where they declared support for the candidate who will be chosen by the Azimio leaders.

The two then made their way to KICC where discussions were still ongoing.

The delay was also occasioned by the death announcement of former President Mwai Kibaki by President Uhuru Kenyatta.

Despite the new lineup, governor hopeful Agnes Kagure had already announced that she will vie for the Nairobi governor's seat as an independent candidate after Igathe was handed the ticket.

"We began this journey years ago and officially launched it on January 7. I have no plans of abandoning the hundreds of thousands who believe in it halfway," she stated.

The Incumbent Ann Kananu has not made any statement concerning Uhuru and Raila’s decision to front Igathe as Azimio candidate.

He said that there is no crisis from the Azimio parties regarding his candidature.
News
9 months ago