The meeting comes after MP Wanyonyi stepped down for Igathe.

• While speaking to the Star through the phone, Sakaja said that they met with an aim of working together.

• During the Azimio council meeting on Friday morning at the KICC, Azimio leader Raila Odinga announced that Wanyonyi had relinquish his bid for governor. 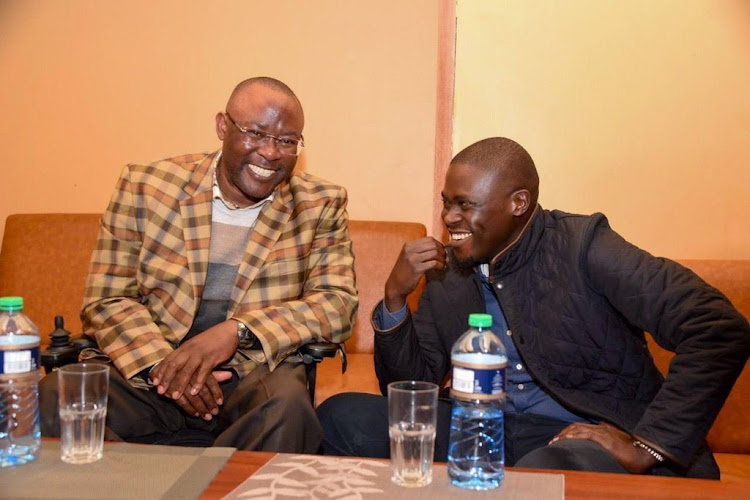 The meeting came hours after the Azimio la Umoja One Kenya Alliance unveiled its Nairobi line up where it was announced that Wanyonyi will be going back to defend his parliamentary seat.

Speaking to the Star after the meeting, Sakaja said that they met with an aim of working together.

"We just met to consult as brothers after the decision they made. That is what happened. I am looking forward to working together with him. What we have realised is that we have the same vision, and that is important than anything else," Sakaja said.

However, a close source to Wanyonyi told the Star that the meeting was not predetermined.

"We just bumped into each other. The meeting was not planned. You heard what was announced today, Tim Wanyonyi is yet to speak so we have to give him time to do so. As far as I am concerned, he is still in the Azimio," the source, who sought anonymity told the Star.

MP Wanyonyi did not pick up our calls by the time of going to press.

During the Azimio council meeting on Friday morning at the KICC, Azimio leader Raila Odinga announced that Polycarp Igathe will fly the governor seat ticket.

The Sakaja, Wanyonyi meeting has elicited mixed reactions among Kenyans considering the two are from different political factions.

Sakaja, who is from the Kenya Kwanza Alliance is yet to name his running mate, an indicator that something could be cooking by the time he names one next week.

Sources say that the senator will name his running mate next week.

He said that there is no crisis from the Azimio parties regarding his candidature.
News
3 weeks ago

Azimio-OKA coalition leadership will decide on the Nairobi Gubernatorial candidate.
Counties
3 weeks ago
“WATCH: The latest videos from the Star”
by KEVIN CHERUIYOT AND JULIUS OTIENO
News
22 April 2022 - 20:45