Museveni said Kibaki was a transformational leader and a true Pan-Africanist.

• Museveni in his condolences message mourned with Kenyans saying Kibaki was a great leader.

• Suluhu on her part said that Africa has lost one of its finest sons, and a dedicated public servant. 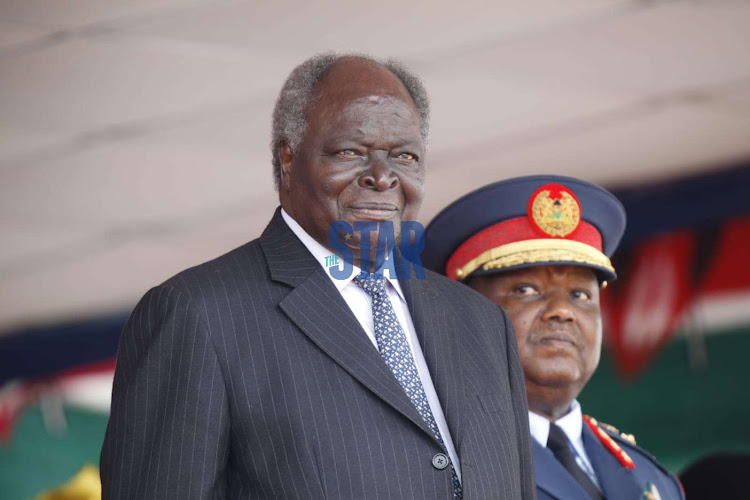 The late President Mwai Kibaki in the past event.
Image: FREDRICK OMONDI

Uganda's President Yoweri Kaguta Museveni and his Tanzanian counterpart Samia Suluhu have sent a message of condolences to Kenyans following the death of President Mwai Kibaki.

Kibaki's death was announced on Friday by President Uhuru Kenyatta.

Museveni in his condolences message mourned with Kenyans saying Kibaki was a great leader.

He said his death has brought sorrow not only to the people of Kenya but also to the East African Community and the African Continent.

“On behalf of the people of Uganda, heartfelt sympathies to the family of H.E Kibaki, H.E. Uhuru Kenyatta, President of the Republic of Kenya and all Kenyans, upon the loss of a Great Statesman,” Museveni said.

Museveni added that Mwai Kibaki was a transformational leader and a true Pan-Africanist.

He said Kibaki played a fundamental role in achieving socio-economic transformation and prosperity for the Kenyan people.

“He was active in deepening the roots of African unity and cooperation for peace, development and security.”

Suluhu on her part said that Africa has lost one of its finest sons, and a dedicated public servant.

“I'm deeply saddened by the passing on of the third President of Kenya, H.E Mwai Kibaki…my condolences to H.E President Uhuru Kenyatta, the bereaved family and all Kenyans.”

"My sincere condolences to the people of Kenya and to the family of President Kibaki. His dedication to the economic transformation of Kenya and his work towards regional integration will be remembered for many generations. The people of Rwanda stand with Kenya during this time," Kagame said.

Kibaki died at the age of 90.
News
2 months ago

President Mwai Kibaki shall be accorded a State Funeral, with full Military Honours.
News
2 months ago
WATCH: The latest videos from the Star
by KEVIN CHERUIYOT Online Journalist
News
22 April 2022 - 18:13