Kasauni MP Ali Mbogo will deputise Sonko if he wins the August elections.

•Speaking during a press conference on Thursday, Kalonzo said the move was after a consensus Sonko and Kisauni MP Ali Mbogo.

•“We have reached a consensus between our two candidates aspiring to become governors in Mombasa County,” Kalonzo said. 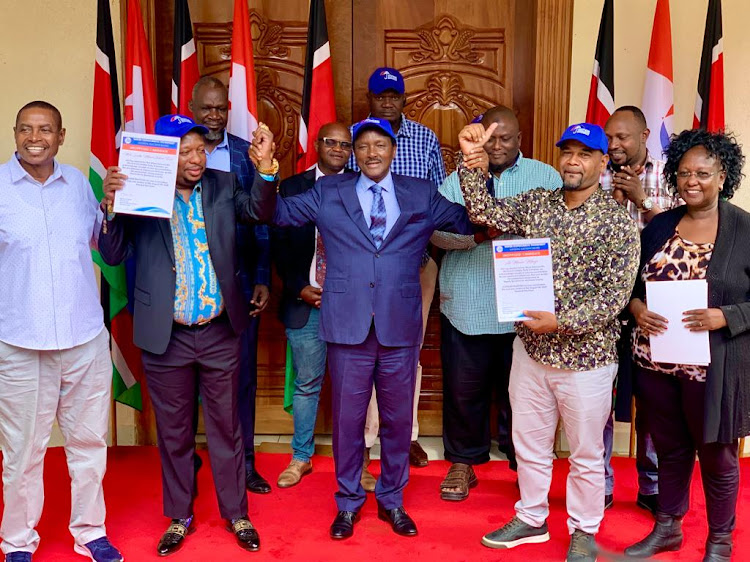 Speaking during a press conference on Thursday, Kalonzo said the move was after a consensus Sonko and Kisauni MP Ali Mbogo.

“Our consensus efforts continue to bear fruit. The National Elections Board is very pleased to announce that Mike Sonko and Ali Mboga have agreed to work together to deliver Mombasa County Governorship,” Kalonzo said.

He said the Kisauni MP accepted to step down for Sonko, and will now deputise him.

Kalonzo expressed his confidence that the Wiper team will win the Mombasa governorship race.

This now settles the twist and turns that have been surrounding the party regarding the ticket that had initially been handed over to Mbogo during the party NDC meeting at the Bomas of Kenya.

Sonko will now battle the with ODM candidate Abdulswamad Nassir and former Mombasa Senator Hassan Omar who will be vying under the UDA ticket of DP William Ruto.

Last month, Sonko joined the party after resigning as a Jubilee Party member following his impeachment back in 2020.

While the images are not manipulated, they are not of Wednesday’s event.
News
4 weeks ago
WATCH: The latest videos from the Star
by KEVIN CHERUIYOT Online Journalist
News
21 April 2022 - 17:29