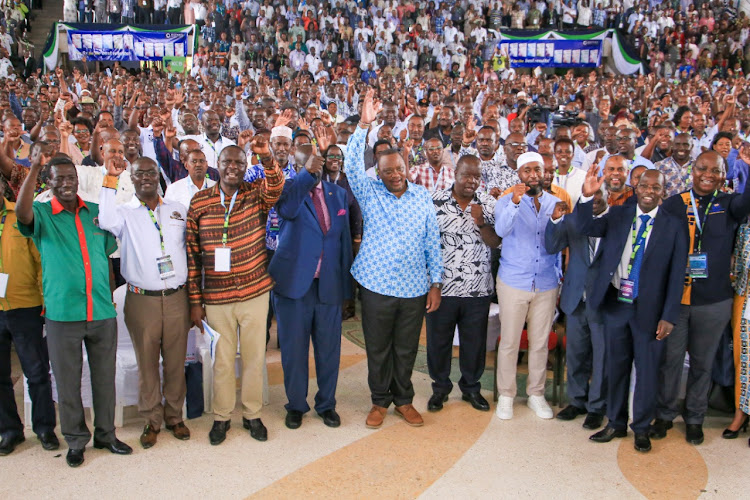 President Uhuru Kenyatta has promised to award outstanding teachers in the country during this year’s Madaraka Day celebrations.

This year’s celebrations will be Uhuru’s last before he exits office in August.

“I want to reiterate once again that my administration recognises the important role that teachers play in advancing our development agenda,” the President said.

“And in this regard, as the Madaraka Day 2022 celebrations approach, I look forward to awarding national honours to outstanding and transformative teachers in the education sector, those who have distinguished themselves through superlative services to Kenya.”

He was speaking at the Sheikh Zayed Hall in Mombasa when he graced the Kenya Secondary Schools Heads Association (Kessha) 45th annual conference on Wednesday.

The Head of State directed the Kessha chairman Kahi Indimuli to forward the names of suitable nominees to the National Awards and Honours Committee, through Education Cabinet Secretary George Magoha.

He applauded some of the teachers who have put Kenya on the global map including Peter Tabichi from Keriko Secondary School in Nakuru who emerged the winner of the Global Teacher Award in 2019.

Uhuru also recognised Erick Ademba from Asumbi Girls Secondary School in Homa Bay, who emerged the Continental Teacher of the Year in 2019 during the awards organised by the African Union.

Jane Kimiti, chief principal of Othaya Girls in Nyeri, bagged the award in 2020.

“Tunawapongeza sana [we congratulate you], this is just an example of the hard work that you teachers put into ensuring the future of our children is guaranteed,” he said.

The President further hailed the teachers for the resilience they showed in ensuring children continued to learn despite the government closing down schools from March 2020 to January 2021 as the country struggled to battle the Covid-19 pandemic.

“The education programme was disrupted during the period affecting about 17 million of our learners, but today I am glad to note that despite the challenge, our teachers tirelessly facilitated learning during that period through a variety of measures such as radio broadcast, online learning platforms and group consultations,” he said.

“Indeed, today Kenya owes you a great gratitude for remaining true to your calling despite the disputed and disruptive learning environment and the adjusted school calendar.”

He said despite the governments’ efforts to keep pupils learning during the pandemic, many lost the education momentum due to poor learning.

The pandemic he said, led to the widening of the education inequality and a rise in teenage pregnancy as well as school dropouts.

“Going forward, therefore, you the teacher must be an instrument in the recovery process in this education sector as well as the overall social and economic journey,” the President said.

He added, “We are counting on you to help our learners recover and to ensure all those who have dropped out get back to school and to ensure that we rebuild the momentum of the education sector reforms.”

At the same time, Uhuru hailed his legacy saying his administration has been very instrumental in transforming the education sector since he took over the country in 2013.

The President hailed the 100 per cent transition to secondary schools policy adopted in 2018, saying that since its inception, Form 1 enrolment has more than doubled to 3.6 million in 2022, up from 1.3 million pupils in 2008.

“The 100 per cent transition policy has ensured all our learners who sit the KCPE examination obtain a place in a secondary school and this has been a huge success,” he said.

The President said since 2018, more than 90 per cent of those who sat the KCPE examination transitioned to a secondary school.

He added that it was notable that since secondary school is free, over 70 per cent of the students enrolled in day schools.

He also added that his administration increased the capitation per child in secondary school to Sh22,244 to ensure no child is left behind because of the economic background.

This is even as the school heads suggested increasing school fees by Sh16,000.

On Tuesday, the principals asked the government to increase the capacitation by Sh8,000 with parents expected to top up the balance.

Uhuru said the government was reforming the education system to make it fit for the 21st century.

He said the government initiated the Competency-Based reforms in 2016, adding that CBC seeks to identify and nurture learners’ potential.

The CBC will also provide the opportunity for the acquisition of values and participation in community service learning and provide pathways and tracks in senior secondary school that are aligned to the broad abilities and career interests of learners.

He further said his administration had expanded the education infrastructure to accommodate the growing education environment by constructing classrooms and providing desks as well as electricity connectivity.

The government is currently constructing 10,000 new CBC classrooms to accommodate Junior secondary schools expected to be rolled out at the beginning of 2023.

So far, 6,470 classrooms are due for completion at the end of this month with the remaining classrooms expected to be completed in the second phase of the programme.

“We have also remained focused on education quality, my administration has provided free books to every child, and we as a country have now achieved a pupil to book ratio of one in all our public primary and secondary schools,” he said.

The President also said in recognising the centrality of teachers in ensuring education quality, the government has invested in a robust teacher training programme.

It has also raised the training budgetary allocation from Sh116.4 billion in 2013 to Sh288.6 billion in the current financial year.

He also added that the government had provided a comprehensive medical cover for both teachers and students through the National Health Insurance Fund.

The President also mentioned that his administration took up the initiative of a digital learning programme in 2013 where teachers and learners received learning devices.

“A total of 21,717 out of 22,988 primary schools have been supplied with these digital devices. We seek to ensure by the time the student gets to secondary school, they are digitally literate and can use digital technologies to broaden their learning experience beyond their immediate learning,” he said.

Uhuru praised the Kenyan education system saying it was among the best in the world as it had produced students who had the ability to compete with the rest of the world.

Magoha said President Kenyatta has hired over 120,000 teachers since 2013.
News
2 months ago

School heads say in the Children Act, students are only answerable to their parents and the State
News
2 months ago

Sh18bn disbursed to schools as students stream back next week