The MP said that the Muslim community has been sidelined by Uhuru's government.

• Duale said that Muslims should not be afraid to speak their minds on leaders to be elected.

• The event was also attended by the Kenya Kwanza leaders, including ANC's  Musalia Mudavadi and Ford Kenya leader Moses Wetangula. 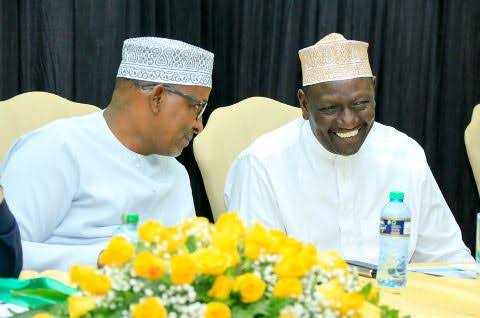 Garissa Township MP Aden Duale has alleged that the criminal and justice system is being used to target and silence people who are close to deputy president William Ruto.

Speaking on Wednesday evening at Ruto's Iftar dinner held at the DP's official Karen residence, Duale said the Speaker of Nairobi County Assembly Benson Mutura was summoned by the DCI following his decision to join the Kenya Kwanza Alliance team.

“Leaders of the Criminal Justice System, you are not going to retire with the president. After four months, we will audit you. We will audit the men and women who are leading the Justice system, and we will not allow you to be used contrary to the Constitution.”

The event was also attended by the Kenya Kwanza leaders including ANC's Musalia Mudavadi and Ford Kenya leader Moses Wetangula.

He at the same time asked all the Muslims in the country to be firm in their decisions ahead of the August 9 general elections.

Duale said that Muslims should not be afraid to speak their minds on leaders to be elected.

The MP said that the Muslim community has been marginalised by President Uhuru Kenyatta's government since the two leaders disagreed on the way forward and that no one from the Muslim has been appointed.

“William Ruto’s main competitor stood in public and said that Mandera County does not deserve the revenue allocation that they go through the Constitution. He said it in Kiambu, he said it everywhere and it is very sad that our leaders are kneeling down for him,” Duale said.

He added: “The BBI marginalised the people of Kenya, and more so the Muslim counties. It denied the whole coast region and part of North Eastern…please my dear Muslim brothers, do not elect cowards in this year's elections. We are a people of faith, if you’re of the Muslim faith you should not be a coward”.

Wednesday's Iftar will be at 6:34 pm in Nairobi.
News
5 months ago

Raila to give tickets at Bomas despite protests by losers