Wanjigi: Ruto is not a true Hustler, he’s lying to Kenyans

Wanjigi said Ruto's agenda for Kenya is not realistic.

•While on his campaign trail, Wanjigi said the DP's agenda for Kenya is not realistic.

•The Safina Party presidential aspirant said all Kenyans have a right to be heard and to be represented despite their population size. 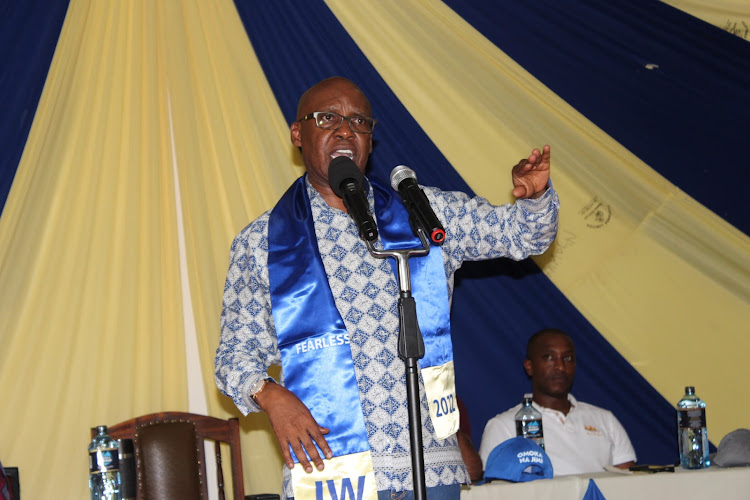 While on his campaign trail, Wanjigi said the DP's agenda for Kenya is not realistic.

“Ruto is not a true hustler because his man (former Treasury CS Henry Rotich) is the one who oversaw the economic misdeeds that are currently burdening Kenyans,” Wanjigi said.

Wanjigi spoke on Sunday in Kwale County after meeting the Makonde community in Guasi.

The Safina Party presidential aspirant said all Kenyans have a right to be heard and to be represented despite their population size.

The businessman also hit out at Uhuru, claiming that he is borrowing every month to meet the budget deficit.

Earlier on, the businessman asked the president to retire peacefully after finishing his second and last term in office and stop interfering with the August general elections.

Wanjigi said the coalition agreement signed by the Azimio coalition is proof that Uhuru still wants to influence government decisions after he leaves office.

“Your appreciation is like that of a donkey which throws kicks, go home we do not want to see you again, just move away from us, go away and go away completely,” he said.

He stated that his journey to State House under the Safina party was unstoppable, affirming that the coalition he was forming would be open to Kenyans and not tribal or based on creating positions.

My government will have no room for tribalism — Wanjigi

Says about 99 per cent of Kenyans have suffered at the hands of corrupt leaders
Counties
1 month ago
WATCH: The latest videos from the Star
by KEVIN CHERUIYOT Online Journalist
News
18 April 2022 - 15:15