Pray for me to get running mate slot, Kalonzo tells Church

• Kalonzo exuded confidence that the will of God will prevail and that he will be Raila's running mate just like in 2013 and 2017.

• He said those who were seeking to sway the outcome of the election using witchcraft and tribal alignments will not subvert the will of God. 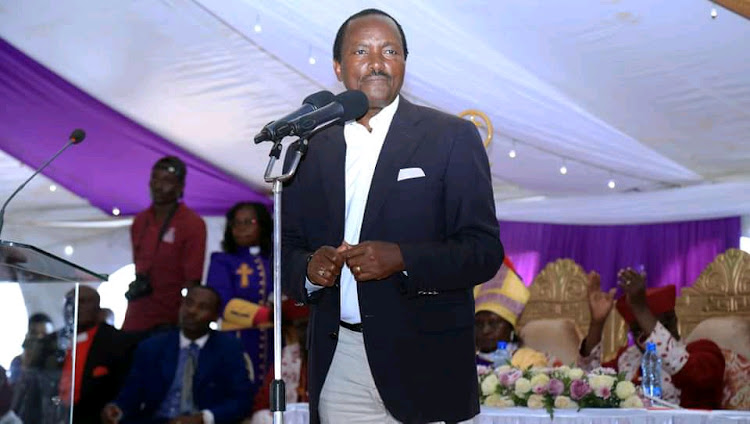 AZIMIO-OKA IN MWINGI Wiper Leader, Kalonzo Musyoka, addressing congregants of ATC on Saturday April 9, 2022 in Mwingi West during the ordination of 10 bishops of the church.
Image: LINAH MUSANGI

Wiper Leader Kalonzo Musyoka has asked the church to pray for him as he battles for the running mate slot in the Azimio la Umoja Movement.

Kalonzo claimed some people are conspiring round the clock to lock him out of the number two post as the Raila Odinga-led outfit seeks to form the next government.

"They are busy conspiring who will be running mate and who will not be running mate. Please help them to change and know that what God has determined no human being will stop it."

Kalonzo spoke on Sunday at Liberty Redeemed Gospel Church in South B where he attended Easter Sunday service.

He exuded confidence that the will of God will prevail and he will be Raila's running mate just like in 2013 and 2017.

According to the Wiper boss, there are those who are seeking to sway the outcome of the election using witchcraft and tribal alignments.

He said some have gone as far as calculating the number of votes he will earn the Azimio movement from the Kamba community, presumably to gauge whether or not he deserves the deputy slot.

"Even those Kambas in the Diaspora, they are giving them numbers. Kalonzo is beyond a Mkamba," the Wiper leader said.

He called on the church to pray for God to liberate Kenyans from the curse of tribalism and the believe in witchcraft.

The former vice president said some of the leaders don't believe in the rule of law and are keen on buying voters whereas leadership is God-given.

"So, will you Kenyans relax? Let God shape the destiny and the affairs of this nation. Stop the conspiracies, stop the thieving, stop the stealing," Kalonzo said.

He said as a christian, he will act as a bridge between the non-believers and the church.