The new cases put the positivity rate at 0.2 per cent.

• All the four are males, the youngest being 29 years old while the oldest is 63 years old.

• Among the new patients are three foreigners and one Kenyan. 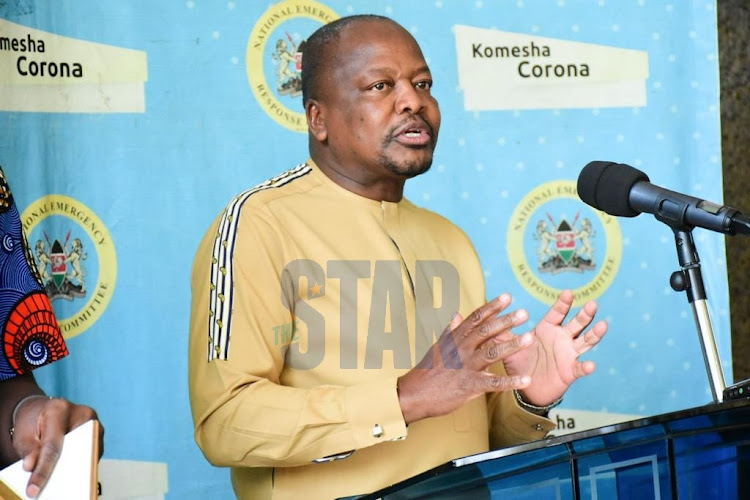 Four people tested positive for Covid-19 on Saturday from a sample size of 2,121 tested over the last 24 hours.

The new cases put the positivity rate at 0.2 per cent.

Among the new patients are three foreigners and one Kenyan.

All the four are males, the youngest being 29 years old while the oldest is 63 years old.

The new figures now put total confirmed positive cases at 323,609  while the cumulative tests conducted so far stand at 3,565,081.

In a statement on Saturday, Health Cabinet Secretary Mutahi Kagwe said three of the patients are residents of Nairobi while one is a resident in Kwale County.

Kagwe said five other patients recovered from the disease from the Home Based and Isolation Care program.

"This pushes the total recoveries to 317,811 of whom 264,793 are from the Home-Based Care and Isolation program, while 53,018 are from various health facilities countrywide," Kagwe said.

He said that the death toll remained at 5,649 as no death had been reported over the period under review.

The CS, however, said 11 patients are currently admitted in various health facilities countrywide, while 122 are under the Home-Based Isolation and Care program.

He said no patient was in the Intensive Care Unit (ICU) or on supplemental oxygen or in the general wards or in the High Dependency Unit (HDU).

On vaccination, Kagwe revealed that the Ministry of Health had by Friday, April 15, 2022 administered a total of 17,810,207 vaccines across the country.

Within a 24-hour period preceding Saturday, 1,231 doses were administered while the total number of people who were fully vaccinated over the same period was 1,061.

In general the proportion of adults fully vaccinated now stands at 30.3 per cent.

This means there is still a deficit of 9,435,826 who must be vaccinated by by end of December for this target be achieved.

Theoretically, the government must over the next eight and a half months vaccinate an average of 37,000 people.

A total of 17,766,932 vaccines have been administered across the country.
News
3 months ago

However warns the upcoming cold season in the southern hemisphere could prompt a new spike in cases.
News
3 months ago
WATCH: The latest videos from the Star
by EMMANUEL WANJALA Radio, Print & Digital Reporter
News
16 April 2022 - 18:02