• Kalonzo handed Kaloki the Wiper Gubernatorial ticket for Nairobi but  said negotiations are there for him to deputise Ngatia.

• The business guru also welcomed Wiper's decision to front Kaloki, noting that the duo will be best in running against opponents in the August polls. 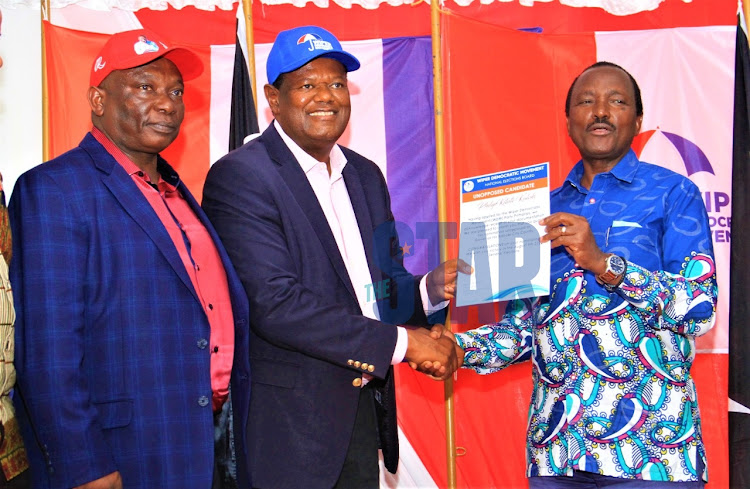 Nairobi County gubernatorial aspirant Richard Ngatia looks as Philip Kaloki receives his certificate from Wiper leader Kalonzo musyoka to go and negotiate with Ngatia on who to deputise the other at SKM Command centre on April15, 2022.
Image: EZEKIEL AMING'A

It will be a Ngatia-Kaloki Nairobi dream team as the Nairobi Gubernatorial race continues to gain momentum.

Kalonzo handed Kaloki the Wiper Gubernatorial ticket for Nairobi but  said negotiations are there for him to deputise Ngatia.

He has however, been spotted with Ngatia several times with the latest being last Sunday in Kangemi when the KNCCI boss launched his candidature.

On his side, Ngatia expressed  gratitude to Kalonzo and the Wiper party for supporting his bid to bring change to the City County.

"I have seen the will of Wiper party members to support my bid moving forward to change Nairobi. I want to thank Wiper for demonstrating faith in my leadership and for the full endorsement," he said.

The business guru also welcomed Wiper's decision to front Kaloki, noting that the duo will be best in running against opponents in the August polls.

"I accommodate and support the Wiper decision of Kaloki. This comes a long way in boosting support to make sure that we under the Umbrella of Azimio as a team compete fully with our opponents. I look forward to working with Kaloki as partners to deliver for Nairobi," Ngatia added .

The businessman will now have to square it out with business lady Agnes Kagure and Governor Ann Kananu for the Jubilee Party ticket.

It is still not clear whether the Azimio La Umoja will seek a consensus among the candidates or let the Jubilee Party nominee face off with ODM Party’s Tim Wanyonyi. Wanyonyi has maintained that he will not defer his bid for any political machination.

The Azimio camp’s candidate will battle it out with Kenya Kwanza’s Johnson Sakaja, who was granted the greenlight to fly the UDA flag in Nairobi.

I won't settle for less than governor seat – MP Wanyonyi

Reports had claimed talks were ongoing to convince the MP to drop his bid.
Counties
4 months ago

The businessman-cum politician is making a return to city politics after his 2018 resignation.
News - Page 8
4 months ago
WATCH: The latest videos from the Star
by MAUREEN KINYANJUI News Reporter
News
15 April 2022 - 17:57