•There were efforts to overturn the deportation order.

•Senior government officials said the move was final and was meant to send signals to the oil firms hoarding the product. 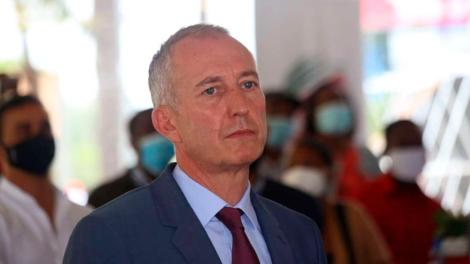 Rubis Kenya Managing Director and CEO Jean-Christian Bergeron was Wednesday ordered to leave the country on claims of economic sabotage due to the ongoing fuel crisis in Kenya.

This was after the State Directorate of Immigration revoked Bergeron’s work permit and ordered him to leave the country following weeks of shortages that have caused a public outcry.

The deportation order that was signed by Interior Cabinet Secretary Fred Matiang’i followed revelations by the Energy and Petroleum Regulatory Authority (Epra) that the leading oil majors increased their fuel exports to neighbouring countries leading to the ongoing shortage that has persisted for three weeks.

And after a meeting with President Uhuru Kenyatta, Energy Cabinet Secretary Monica Juma recommended further sanctions against oil marketing companies that were complicit in creating the fuel shortage in the country.

She was set to address a press conference on Thursday on the issue.

There were efforts to overturn the deportation order. Senior government officials said the move was final and was meant to send signals to the oil firms hoarding the product.

Four oil marketing companies are set to face punitive measures, including reducing the capacity that they import into the country.

Further, the government is said to have set plans in motion to strengthen the capacity of National Oil to avert such a crisis in future, and also to have a bigger role in the fuel retail business.

The dealers have linked the shortages to a lack of clarity on the fuel subsidy that Kenya introduced last April to stabilise prices.

Delays in the payment of subsidies to the companies by the government have pushed up prices in the wholesale market where oil majors resell fuel to the smaller independent fuel retailers, who control 40 per cent of the market.

This has seen the small retailers hesitate to buy the costly fuel, with the increased supply of oil majors unable to plug the deficit.

The shortage has crippled some transport firms and opened an avenue for some dealers to raise prices above the caps set by the Epra.

In some areas, a litre of petrol retailing at Sh200 or more.

Epra is set to release its monthly prices on Thursday.

Long queues are also being experienced in major fueling spots.
News
4 months ago

Rubis to spend Sh98.7bn in Kenya in the next five years

Monies to go into storage, distribution and sale of petroleum and LPG in the country.
Business
1 year ago

Nyamira motorists forced to go to Kisii, Homa Bay to look for fuel

Most fuelling stations in the county have not had fuel since Friday last week.
Nyanza - Page 29
4 months ago
WATCH: The latest videos from the Star
by CYRUS OMBATI Chief Crime Reporter
News
14 April 2022 - 10:51