• Addressing 27 newly elected MPs from Kismayu at Jubaland State House, Madobe said it's unfortunate elections for the remaining 16 slots are yet to be conducted.

• He accused President Farmaajo’s administration of interfering with the polls. 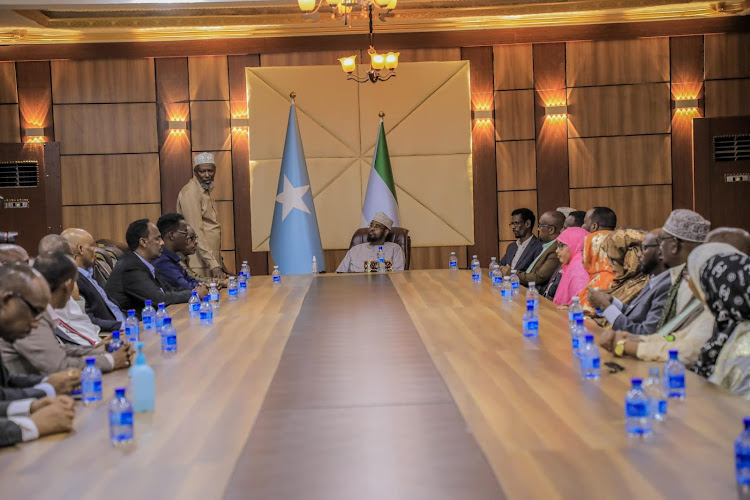 Jubaland leader Ahmed Madobe has urged the international community to intervene to ensure the delayed elections in Gedo region are held in a free and fair manner.

Madobe, who is embroiled in a tussle with Somalia President Mohamed Farmaajo over the delayed 16 parliamentary slots in Gedo, has called for deployment of international election observers.

Addressing 27 newly elected MPs from Kismayu at Jubaland State House on Sunday night, Madobe regretted that elections for the remaining 16 slots are yet to be conducted. He accused President Farmaajo’s administration of interfering with the polls.

Madobe has, for instance, accused President Farmaajo of plotting to deploy troops and clan militia to Jubaland.

"We have defeated al Shaabab to restore peace and stability in this region but President Farmaajo's administration is posing security challenges to Jubaland administration," Madobe said in his address.

He was accompanied by the two vice presidents and the speaker of  Jubaland Parliament.

He further said Villa Somalia is using all possible means to have Farmaajo's preferred candidates elected, so that they can vote for him in the presidential vote.

In a statement shared on Jubaland State House Facebook page, Madobe said it was not possible for some individuals in the international community to have him share the slots with Farmaajo, adding that the legislators would be elected by local representatives.

Delegates are supposed to vote for 275 MPs for the Lower House, while state legislatures elect senators for the Upper House, a process that has now been completed.

Once the Lower House election is concluded, the two assemblies will vote for president.

Madobe told the new legislators to take their oversight role seriously and protect the region from Farmajo’s forays.

He said the Somali National army has been misused on several occasions to undermine Jubaland’s autonomy.

"You will be re-elected based on your performance and protecting Jubaland against excessive presidential powers of the Somali National Government,'' Madobe said.

He also urged them to familiarize themselves with the constitution for them to serve diligently and accomplish their mandate as elected MPs.

On Tuesday, the Federal Electoral Commission invited the new MPs for their swearing in on Thursday at 10am at Afisyoni tent near Mogadishu airport.

To ensure safety, the African Union Transition Mission in Somalia announced a total lockdown at its Halane Base Camp between April 10-16.

ATMIS said the lockdown is a precautionary measure to prevent attempts by terrorists to breach security in times of heightened imminent security threats, festive periods, and other high-level government/partner activities.

"Its sole purpose is to facilitate operations aimed at ensuring that the Base Camp remains a safe, secure, and conducive place during this critical electoral period, including the swearing-in ceremony, the celebrations of the 62nd Somalia Army Day and the entire Ramadan period," the AU mission said in a statement on Sunday.

ATMIS added that it is working with Somali Security Forces to ensure the completion of the elections in completed in a conducive and violence-free environment.

The camp houses ATMIS, United Nations and other international agencies.

Elders appeal to international community to intervene and help have the centre relocated.
News
8 months ago

Trouble in Jubaland as aspirants demand change of election centre

Claims Jubbaland opposition leaders are planning to recruit and arm militia against Madobe might derail polls process
Siasa
9 months ago
Post a comment
WATCH: The latest videos from the Star
by ELIUD KIBII Subeditor and writer
News
12 April 2022 - 12:46
Read The E-Paper