The officers had proceeded on leave before they reported on Tuesday.

•The officers were part of the 298 direct entry cadets specialists who graduated at the National Police College Main Campus – Kiganjo on January, 20.

•The officers had proceeded on leave before they reported on Tuesday at the DCI academy for deployment. 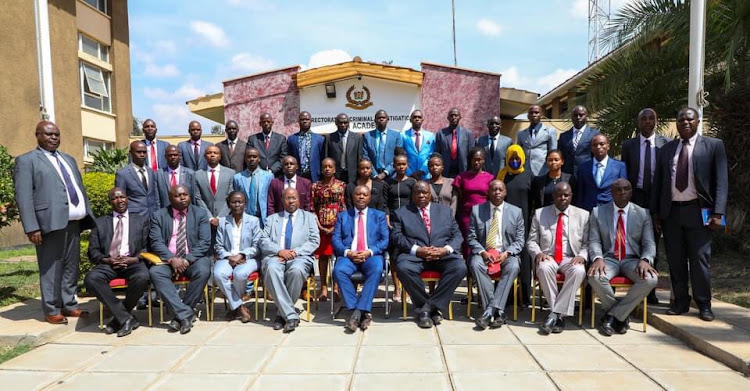 The Directorate of Criminal Investigations George Kinoti on Tuesday welcomed 48 newly skilled officers of the inspectorate rank to its unit.

DCI boss George Kinoti said the officers were selected courtesy of their skills and qualifications to join the country’s foremost investigative agency.

The officers were part of the 298 direct entry cadets specialists who graduated at the National Police College Main Campus – Kiganjo on January, 20.

The officers had proceeded on leave before they reported on Tuesday at the DCI academy for deployment.

They were received by Kinoti, accompanied by the deputy director Joseph Ashimala, the Director Personnel Mwangi Wanderi among other senior officers and top DCI commanders.

The officers include those who specialized in medicine and surgery, law, cyber security experts, molecular biology scientists and Computer scientists.

While addressing the officers, the DCI Director congratulated and welcomed them heartily to the DCI family.

Kinoti urged the officers to execute their duties with diligence and utmost fidelity to the law as the surest way to enjoying a fulfilling career in investigations.

Further, he reminded the officers that they had taken an oath to serve the country without fear or favour, affection or ill will and urged them to desist from the temptation to engage in corrupt practices or sell justice to the highest bidder.

“I call upon you to uphold the good reputation that the Directorate has so painstakingly earned over the past few years and do not use your appointment as an opportunity to deny justice to those who deserve it,”  Kinoti said.

“Let the tears of a poor man not deny you God’s blessings in your career."

The DCI director also implored the officers to manage their expectations and take time to learn from their more experienced colleagues in the field regardless of the ranks they hold, adding that proficiency in investigations knows no ranks.

Others will be deployed in the field to sharpen their skills in investigations before being redeployed to their areas of speciality.

The officers will later be exposed to further training locally and internationally, to keep them abreast with contemporary investigative practices and bring them at par with their colleagues in the Directorate.

Speaking on behalf of the officers, Inspector Terry Nyambura, who is also an Advocate of the High Court, Commissioner of Oaths and Notary Public, assured the director that they would inject new blood into the DCI juggernaut to meet the investigative needs and requirements of the directorate.

“While I thank you Sir for your fatherly advice, may I on behalf of the team reiterate our commitment to serve with dedication and promise to give our best in the service of our beloved country,” Nyambura said

Among the officers who made it to the Directorate is Inspector Sharon Ijeloti.

She was the detail’s commander during the passing out parade presided over by President Uhuru Kenyatta.

She earned her pride of place as the first parade commander for the direct entry cadets’ course, recently re-introduced in the National Police Service Curriculum.

DCI says duo defiled a girl after they gained entry into her room in Langas.
Counties
2 months ago
by MERCY WAIRIMU
News
12 April 2022 - 19:38