Explainer: How Nairobi Expressway will operate

Motorists who miss the planned exit will be required to proceed to the next toll station.

•Moja Expressway, a subsidiary of China Road and Bridge Corporation, will operate the road for 27 years to recoup the money through toll fees.

•CRBC is responsible for designing, financing and building the expressway, and will maintain and operate it during the concession period. 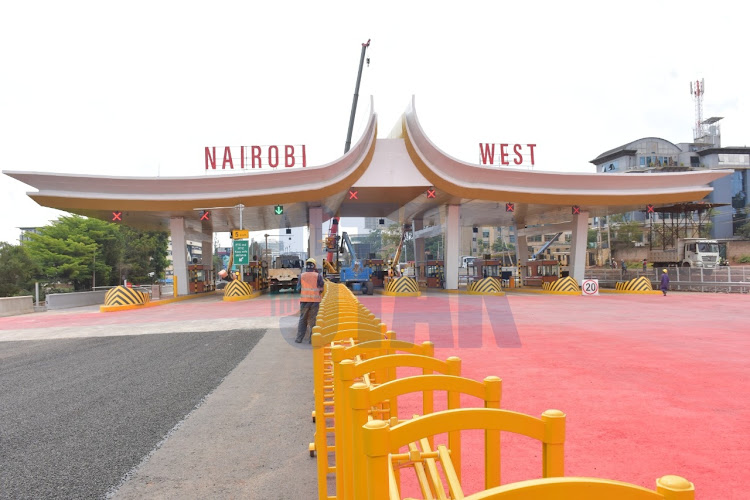 The Mainline station at the endpoint—St Mark's/Lion Place along Waiyaki way on March 31, 2022.
Image: MERCY MUMO

Motorists using the Nairobi Expressway will be required to move at a speed of 80km/h once opened to the public.

Taking U-turns and reversals is prohibited on the expressway, with motorists who miss the planned exit required to proceed to the next toll station to leave.

These are part of the Moja Expressway safety tips for the Nairobi Expressway.

Moja Expressway, a subsidiary of China Road and Bridge Corporation (CRBC), will operate the road for 27 years to recoup the money through toll fees.

CRBC is responsible for designing, financing and building the expressway, and will maintain and operate it during the concession period.

Several activities have also been prohibited on the expressway, including graffiti and scribbling on expressway property and setting up billboards without prior authorization.

Racecar drivers have also not been spared as any form of speed test and race is prohibited along the expressway.

Stealing and damaging properties as well as construction without permission is also not allowed.

"Rearing and herding livestock on and along expressway as well as setting up stalls, parking, dumping waste and blocking ditches under the bridge are prohibited,” reads the notice.

Motorists have also been banned from driving along the emergency lane set aside except in cases of emergency.

Overloading is also not allowed and in case one intends to drive an oversized load vehicle along the expressway, they will be required to submit an application to the Expressway Plaza three days in advance.

How to use and apply for expressway

Motorists using the Nairobi Expressway will be required to pay electronically or in cash.

Moja Expressway company will provide motorists with the Electronic Toll Collection (ETC) service which offers fast and easy transit through the expressway.

To start using the expressway, motorists will be required to visit the Service Centre at Nairobi Expressway Plaza along Mombasa Road and fill in the Service Subscriber Registration Form.

One will then present the Identification Card(ID) or passport and a logbook.

Motorists will then be charged a service charge of Sh1,000 inclusive of VAT.

This will facilitate the installation of the On-Board Unit (OBU) device which is a communication device mounted on vehicles or the Manual Toll Collection( MTC) card which will be used at the tolling station.

The motorists will then purchase toll points with the minimum being worth Sh2,000 valid for one year but there is no limit to the maximum amount that one opts to pay.

After purchase, the toll points are loaded into the OBU device or MTC.

To top up points, motorists will be required to visit the service centre, however, plans are underway to have motorists load to purchase the toll points via mobile phones.

The OBU device will be installed on the windscreen and motorists will have their specific ETC lane along the expressway.

According to Moja Expressway, motorists with OBU will not be required to stop at any toll stations because on the exit lane it will be detected and calculated on where one joined the expressway and the amount will then be deducted.

The MTC will work the same way a credit card works, which will be periodically topped up through electronic payments.

For MTC users, they will be given a pass voucher at the entry point which will be submitted at the toll station before the exit point.

With the pass voucher, the toll station will calculate the amount to be deducted depending on the entry point and distance covered.

Motorists will receive an alert via their mobile phones whenever the funds in the ETC or MTC are about to be exhausted.

Those opting to pay cash will still get the pass voucher at the entry point and will be required to pay at the toll station before the exit.

The Government had announced that I will conduct test runs this month ahead of the commissioning of the expressway by President Uhuru Kenyatta.

As of March, Transport CS James Macharia had updated that the construction of the expressway stood at 95 per cent.

The bulk of the work along the 27.1 km road, being the main infrastructure, was said to be completed with the focus shifted to ancillary infrastructure.

Motorists will be charged differently depending on their destinations.
InPictures
9 months ago

What will not be allowed to use Nairobi Expressway

Motorists will be required to pay between Sh160 to Sh310 to use the road.
News
10 months ago