“We expect an expeditious conclusion to this matter," Junet said.

• They told detectives at the Directorate of Criminal Investigations headquarters that they believe the incident was pre-planned.

• Junet and Babu recorded their statements as witnesses to the incident which happened as Raila was about to fly out of a funeral of politician Jackson Kibor. 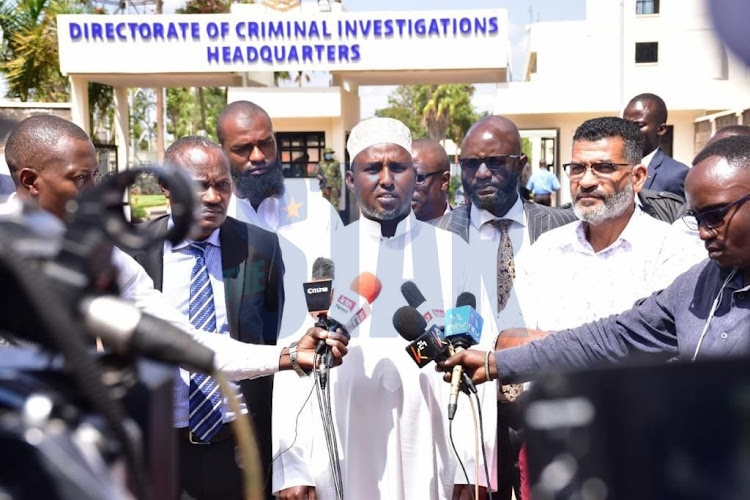 Three MPs Junet Mohamed (Suna East), Babu Owino (Embakasi East), and John Mbadi (Suba South) were questioned by police over an incident in which a chopper that was carrying ODM leader Raila Odinga was stoned in Uasin Gishu.

They told detectives at the Directorate of Criminal Investigations headquarters that they believe the incident was pre-arranged.

Junet, and Babu recorded their statements as witnesses to the incident which happened as Raila was about to fly out of a funeral of politician Jackson Kibor.

They had been summoned by the head of investigations at DCI John Gachomo who said their grilling will help in the ongoing probe into the incident.

The three drove to DCI headquarters and stayed with detectives before walking out.

“We expect an expeditious conclusion to this matter," Junet said.

He said he gave the police information he hopes will be useful in their investigations over the recent stoning of the chopper.

“No political zoning in our country,” he said.

Soy and Kapseret MPs Caleb Kositany and Oscar Sudi respectively presented themselves at the Rift Valley Regional DCI headquarters in Nakuru, over their alleged role in the stoning of the chopper.

Their mobile phones and two others were taken away by police as part of the probe into the incident.

DCI, in a statement Saturday said investigations into the incident suggested the two were involved in the incident.

They have denied any role in the incident and condemned it.

The DCI has said the probe file will be sent to the Office of the Director of Public Prosecutions with recommendations to charge some of the leaders.

Section 20, Penal Code says when an offence is committed, each of the following persons is deemed to have taken part in committing the offence and to be guilty of the offence, and may be charged with actually committing it.

Also, any person who counsels or procures any other person to commit the offence is a principal offender.

Interior Cabinet Secretary Fred Matiangi Tuesday termed it a premeditated attack. While appearing before the National Assembly Committee on National Security and Administration of Justice, the CS said among the evidence gathered was large wads of Sh50 notes.

"Bribery of voters and mobilization of rented crowds are the main security challenges linked to the General election that NPS service is currently facing," he said.

Seventeen suspects are in custody of the incident. Police were allowed to hold them for seven days to complete their investigations into malicious damage to property and attempted murder.

Other charges preferred against the 17 include incitement to violence and disturbance of the peace.

Raila had visited the home on Friday evening just after the burial ceremony had been concluded when the incident that has drawn huge public condemnation happened.

The prosecutor said the suspects damaged a chopper whose value exceeds Sh300mn.
News
7 months ago

Political goons and their financiers must be weeded out