• His remarks came just a day after Deputy President William Ruto blamed graft cartels in the fuel industry for the crisis gripping the nation.

• Duale claimed oil marketers are now exporting their stock to Rwanda, Tanzania, Uganda and the Democratic Republic of Congo due to lack of profits. 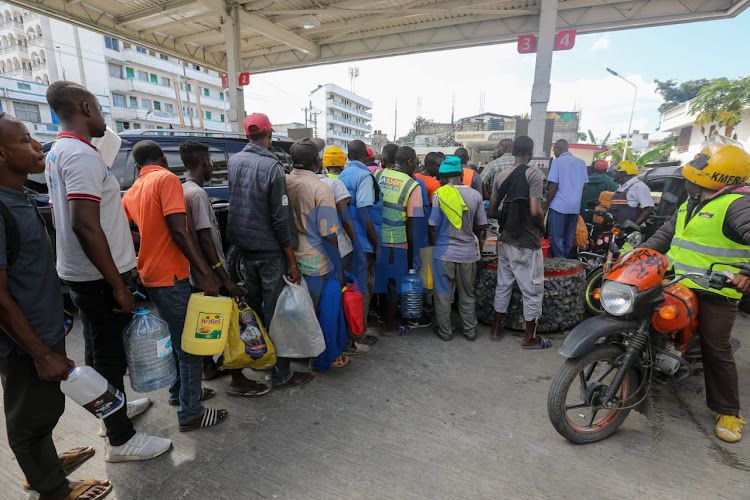 Garissa Town MP Aden Duale has put government on the spot and demanded a statement on its position over the current fuel crisis.

Duale on Tuesday requested a statement from the Energy Cabinet Secretary on what the government intends to do to ensure fuel adequacy is restored in the country.

"The statement should include contingent measures put in place by the government in the case of a prolonged Russia-Ukraine crisis," Duale said.

He spoke during question time in the National Assembly.

His remarks came just a day after Deputy President William Ruto blamed graft cartels in the fuel industry for the crisis gripping the nation.

The MP on his part claimed the crisis dates back to September 2021 when the government initiated drastic fuel price increases leading to public outcry.

The MP said the long queues being witnessed at fuel pumps across the country are unlikely to abate unless the government comes clear on the true position of the fuel shortage.

He said government and state agencies in the energy sector  are contradicting each other.

"The Energy and Petroleum Regulatory Authority (EPRA) informed kenyans on April 1, 2022 that the country has 80,766 cubic meters of petrol (enough to last nine days) and 217,570 cubic meters of diesel, sufficient for 22 days," Duale said.

"This contradicts a statement by the Kenya Pipeline Company (KPC) on Saturday, April 2, 2022," Duale added.

"When two main state entities charged with the steady supply of fuel and regulation of petroleum prices are at a cross purpose then the existing fuel crisis is just but the tip of the iceberg, Kenyans are on their own," Duale said.

He termed KPC's statement as a rhetoric of bureaucracy.

Duale said the main reasons for the current fuel shortage in the country is price hikes.

"EPRA increased the pump prices of petrol and diesel by Sh 5 per liter on March 14, 2022. Despite the prices increase, the government maintained the margins of oil companies at zero meaning no profits for the companies," he said.

According to Duale, the lack of profits for oil marketers led to hoarding of fuel thus creating an artificial shortage of the precious commodity.

"The cash flow for the Oil Marketing Companies (OMC) is seriously affected by incessant delays by the National Treasury to reimburse them under the subsidy programme thereby leading to hoarding the little fuel they still have in their reservoirs," Duale said.

Duale claimed oil marketers are now exporting their stock to Rwanda, Tanzania, Uganda and the Democratic Republic of Congo (DRC) where they are guaranteed instant cash on sales thus creating a shortage in Kenya.

The MP asked the Controller to give a breakdown of the number of oil marketers in the country and their network distribution across the country.

He further wants the Controller to state the total amount of money collected under the Fuel Levy Fund since September 2021 to date as well well as a breakdown of the reimbursement due to be paid to Oil Marketing Companies, petroleum dealers and small oil dealers.

Duakle also wants the CS National Treasury to explain why the processing of the Petroleum Products (Taxes and Levies) (Amendment) Bill 2021 stalled.

"The CS has not given a non-objection to the Bill as required under Article 114 (2) of the Constitution," Duale said.

Fuel is already expensive because of taxes, and now pumps are dry.
Counties
4 months ago
WATCH: The latest videos from the Star
by EMMANUEL WANJALA Radio, Print & Digital Reporter
News
05 April 2022 - 16:56