Some of the suspects accused on stoning Raila Odinga's chopper when they were arraigned on April 4.
Image: MATHEWS NDANYI

A court in Eldoret has allowed police to detain for seven days 17 suspects arrested for allegedly stoning a chopper that was carrying former prime minister Raila Odinga.

Senior Resident Magistrate Emily Kigen ordered that they be detained at the Eldoret police station to enable DCI complete investigations against the accused.

The prosecution led Jamleck Mureithi had requested 14 days arguing that the suspects are likely to face serious charges and hence they were a flight risk.

The suspects are being investigated over offences of attempted murder, malicious damage to property and incitement to violence.

They will be detained until April 14 when the case will be mentioned.

The prosecutor told the court that the suspects damaged a chopper whose value exceeds Sh300 million.

He said some of the suspects were unknown and may escape if released.

It's alleged that they committed the offences on April 1 at Kabenes in Uasin Gishu. 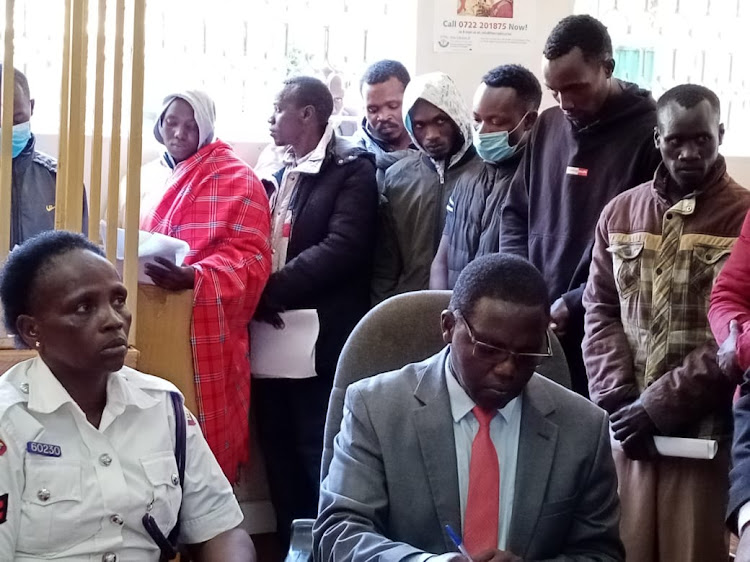 Some of the suspects accused on stoning Raila Odinga's chopper when they were arraigned on April 4.
Image: MATHEWS NDANYI

The seventeen suspects were on Saturday arrested over the stoning of Azimio la Umoja presidential candidate Raila Odinga's chopper at Kabenes after the burial of Mzee Kibor in Uasin Gishu.

Uasin Gishu County Commissioner Stephen Kihara said those arrested have given information on how the incident took place.

He added that key political leaders in the region have been linked to planning the incident.

The National Police Service in a statement said those arrested were found to be in possession of money in Sh50 denominations and are helping with investigations.

The arrests came after Interior Cabinet Secretary Fred Matiang'i directed the National Police Service to investigate and arrest youths involved in the stoning of Raila's chopper on Friday.

The former PM's chopper was attacked in Uasin Gishu County.
News
10 months ago

The prosecutor said the suspects damaged a chopper whose value exceeds Sh300mn.
News
10 months ago