• He said that the government officials should not blame Russia-Ukraine crisis for the current shortage of fuel.

• “Where is the Sh39 billion petroleum development Levy fuel Fund meant for fuel subsidy program as this crisis deepens?” 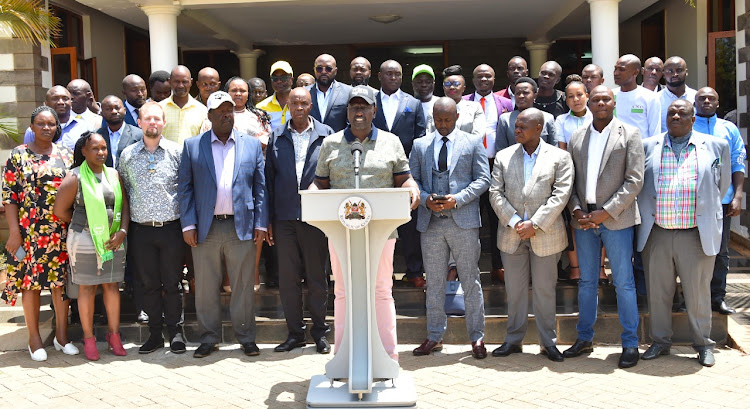 Deputy President William Ruto has said that the current state of affairs being witnessed in the country is due to state capture, where cartels and incompetent public officials have colluded to steal from Kenyans.

In a Kenya Kwanza Alliance press address on Monday, the DP said that Kenyans are now waiting for action from the National Treasury, Agriculture and the Petroleum ministries.

Ruto added that Kenyans want an end to the issue of conflict of interest and state capture.

"The casual and insensitive attitude to the plight of tens of millions of struggling Kenyans is a disturbing development that has embolden cartels that have taken over critical economic sectors," Ruto said.

“Where is the Sh39 billion petroleum development Levy fuel Fund meant for fuel subsidy program as this crisis deepens?”

He said that silence from the concerned ministries as the situation worsen is a matter of concern, as Kenyans have been forced to dig deeper into their pockets as the prices of various commodities soars.

“In the midst of this distressing crisis, the loudest messages from public officials including Ministers are centered around BBI reggae and Azimio jingle bells,” Ruto said.

He said that the government officials should not blame Russia-Ukraine crisis for the current shortage of fuel.

"This is the result of collusion between monopolistic cartels and economic saboteurs on one hand and oblivious, reckless, insensitive and incompetent public officials on the other. Insatiable greed and corruption is driving us over the cliff. ," Ruto said.

On the issue of fertilisers, the DP said that many farmers have failed to plant because the price of fertiliser has moved from Sh3,000 to a high of Sh7,000 per 50kg bag, a price that he said is beyond the reach of most farmers during this planting season.

"It thus means that this year’s harvest will be dismal, further compounding the problem of food security in the country."

"The government of Kenya knows that millions of households cannot cope with these prices. The largest casualties of this crisis are the vulnerable."

The DP said the Treasury must rise to its constitutional accountability and live up to the Public Finance Management Act.

"Failure to do the right thing will convert the National Treasury into a cog in state capture and corruption that will destroy our country."

The sentiments of the alliance comes hours after President uhuru Kenyatta signed five bills into law.

Uhuru allocated a sum of Sh34,446,813,295 from the Supplementary Budget to the government fuel stabilisation programme aimed at cushioning Kenyans from the high cost of fuel.

This comes as a relief to Kenyan motorists across the country who have been queuing for the past weeks as filling stations run out of fuel.

He signed into law five parliamentary bills on Monday.
News
1 month ago

“When I say I'm supporting Baba (Raila) I don’t mean the other people are bad."
News
1 month ago
WATCH: The latest videos from the Star
by KEVIN CHERUIYOT Online Journalist
News
04 April 2022 - 16:43