"What if Raila was injured in that attack? Kenya would have been on fire right now."

•He cautioned politicians against inciting Kenyans as they hunt for votes.

•"Nobody will leave Kenya after elections. We all belong here, so let us go to the elections in peace," he said. 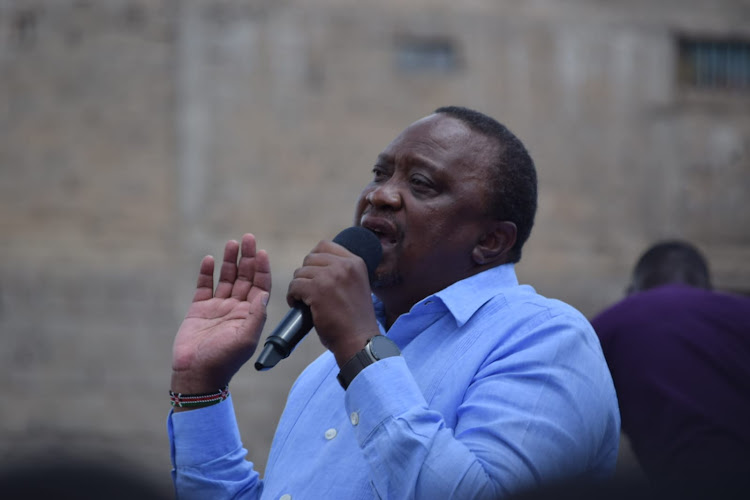 President Uhuru Kenyatta has called for tolerance among ordinary Kenyans and the political class in the run-up to the General Elections.

Regretting Friday's incident where ODM leader Raila Odinga was attacked by stone-pelting youth in Uasin Gishu, Uhuru said no Kenyan should be attacked because of their political stand.

"What if Raila was injured in that attack? Kenya would have been on fire right now and that is not what we want," he said.

Addressing a roadside rally after a church service in Pipeline area in Nairobi, Uhuru added that Kenyans should embrace mature politics.

"You saw what happened at my home in Gatundu. They insulted me at my doorstep but I chose to be silent about it," he added.

He cautioned politicians against inciting Kenyans as they hunt for votes.

"Nobody will leave Kenya after elections. We all belong here, so let us go to the elections in peace," he said.

The Head of State urged political leaders to lead by example and promote peace and co-existence among Kenyans.

"But most importantly, especially for us political leaders, we should behave in a manner that allows our people to live in peace and to go about their business regardless of who sits in which position," he said.

He called on Kenyans to shun violence and not to allow themselves to be influenced by politicians with selfish motives.

"So ask ourselves, if you take a stone or a slasher to go and cut your friend instead of waiting for the next five years to elect your leader of choice, then you have lost direction."

He added that even though Kenyans choose their leaders through the ballot, the final decision is God's will.

"Because the decision as to whom shall lead from MCA to the president, as much as it is our responsibility as citizens, it is also God's will because he speaks through us," he added.

The ODM leader was attacked in Uasin Gishu on Friday after the burial of Mzee Jackson Kibor.

Suna East MP Junet Mohamed claimed that they were mid-air when the attack happened. He said they had to seek alternative means as soon as possible.

So far 17 people have been arrested and three politicians summoned over the incident.

Soy Member of Parliament Caleb Kositany and his Kapseret counterpart Oscar Sudi honoured police summons and presented themselves to the Nakuru DCI offices on Sunday.

Media reports indicated that the Uasin Gishu County Speaker David Kiplagat was at the DCI offices during morning hours.

The two are currently being interrogated as the police try to uncover whether the politicians were behind the planning of an incident where Odinga's chopper was stoned.

Raila had attended Mzee Kibor burial in Uasin Gishu.
News
10 months ago
Post a comment
WATCH: The latest videos from the Star
by ALLAN KISIA AND PURITY WANGUI
News
03 April 2022 - 15:11
Read The E-Paper