Ruto angry because Uhuru and I support Raila — Kalonzo

Wiper leader says DP should stop attacking him, the President and ODM boss

•Raila and Kalonzo held joint campaigns in Turkana after attending a church service in Lodwar town.

•The ODM leader pledged to grow the region, open up its economy and reduce the high cost of living. 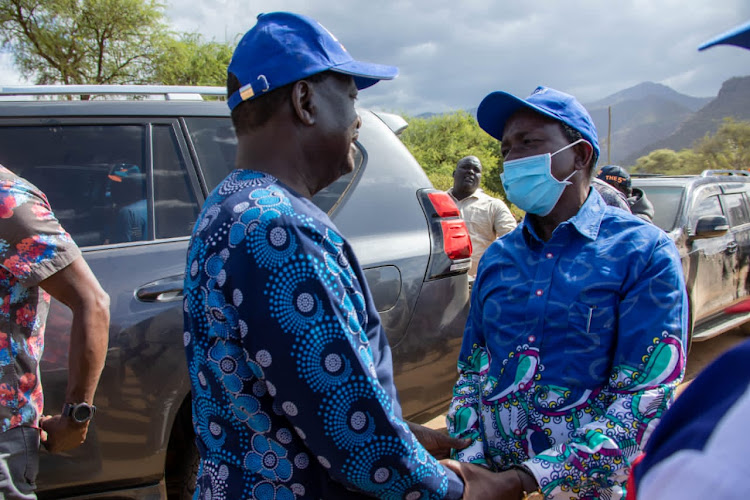 Wiper leader Kalonzo Musyoka has said Deputy President William Ruto has been displaying raw anger in public after he teamed up with ODM boss Raila Odinga.

The former Vice President on Sunday, said the frequent outbursts by the DP against the Azimio team, which is under the patronage of President Uhuru Kenyatta, was evidence Kenya Kwanza is desperate.

The Wiper boss said the DP was angry because it became clear Raila would succeed Kenyatta as Kenya's fifth president on the day he (Kalonzo) endorsed him.

“Since declaring my support, I have been peaceful. From that day, the fifth President of the Republic of Kenya is Raila. This is why Ruto is angry a great deal,” Kalonzo said in Turkana.

The former Vice President joined Raila on the campaign trail for the second day running in rallies to campaign for Azimio ahead of the August 9 general election.

Kalonzo said the Kenya Kwanza team has been jolted by the joint force bringing together more than 25 political parties backing Raila.

“They know by our joining this battle that we are going to win this race," the Wiper leader said.

"They thought they could start in 2018 and win but are coming to learn we have caught them and they are now not seeing clearly.

“They are very angry, so angry. You cannot be a leader of such temperament. Hasira ni hasara (Anger causes losses). We don’t even want to focus on that."

They said the anger targeted at the handshake principals explains why Raila’s chopper was stoned by rowdy youths at the Jackson Kibor's home on Friday when he was buried.

Raila was joined by former Petroleum CS John Munyes and Loima MP Jeremiah Lomurkai. They are frontrunners in the race to succeed Governor Josphat Nanok, a former ODM stalwart.

Former Gatanga MP Peter Kenneth said it was regrettable the DP was seeing  the only way out was to insult leaders who are not backing him.

“Did President Kenyatta make a mistake in endorsing Raila? They are seeing the only way is to insult Uhuru, Raila and other leaders," Kenneth said.

"After seeing that is not enough, they are throwing stones at Raila’s chopper. We know who the youths who did this are who they are working for."

Raila, meantime, called upon leaders from all political parties to preach peace, "for without peace there cannot be any development."

“We will ensure there is peace between all communities, not only among the Turkana, Pokot, Marakwet and Tugens living here,” Raila said.

Raila said his administration will ensure good relations with neighbours across the border to prevent any harassment of Kenyans.

"We will speak with President Yoweri Museveni. We don’t want our people being harassed in Uganda," he said.

Raila restated his message in Pokot and Marakwet at the weekend, saying, “I said we don’t want to see Kenyans killing each other over issues we can solve.”

Raila visited the region with a promise to upgrade the Lodwar Hospital to Level 6, revive the Lake Turkana fisheries cooperative and upgrade the Lomidat slaughterhouse.

“We will expand it so we slaughter more animals for export to Europe. We will upgrade Lodwar Hospital to Level 6 to cut distances to Eldoret. We want people to be treated here," the ODM leader said.

"We will also give a charter to Turkana University. We will do these in one year."

He also promised infrastructure upgrades, especially a road that links Lodwar to Moroto in Uganda, a key trade route.

Raila urged residents to reject the 'wheelbarrow' narrative, saying his administration would have plans to tackle ignorance, poverty, and disease.

He says MP Kuria should focus on the needs of his constituents.
Counties
8 months ago