Raila, Kalonzo to hit the road in joint campaigns

•The agreement signing marked the official launch of Azimo la Umoja One Kenya. 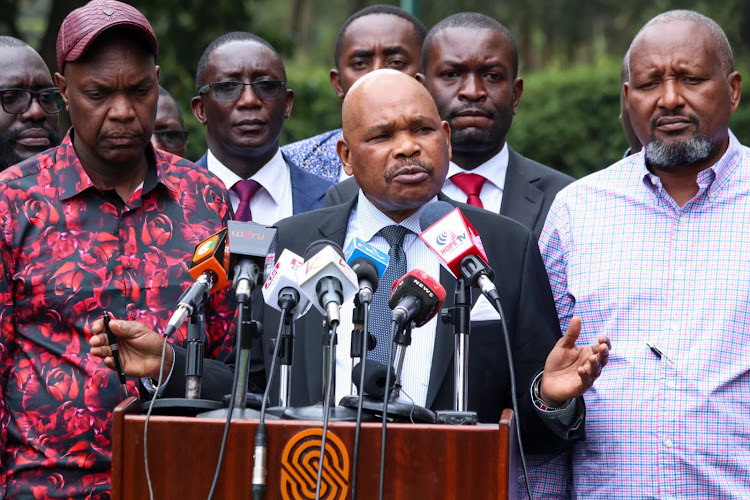 ODM leader Raila Odinga and his Wiper counterpart Kalonzo Musyoka are set to hit the road in joint campaigns beginning this weekend.

This followed the signing of the coalition agreement on Friday that will now see the name of the political machine change to Azimio la Umoja-One Kenya coalition.

Raila's team had resisted the adoption of the One Kenya Alliance name but Kalonzo warned it was a deal breaker.

Party stalwarts told journalists on Friday that Raila and Kalonzo are expected to address meetings together starting with West Pokot on Saturday before moving to other parts of the country.

Raila’s itinerary shows that the ODM leader would address meetings at Ortum, Alale and Lomut before heading to Turkana on Sunday for a church service and a series of meetings.

There have been concerns of a loud absence on Kalonzo’s part in the wake of Raila moving alone on the campaign trail, fears which his allies attempted to allay.

Kalonzo and the OKA brigade have been a no-show in the campaigns.

Their allies came to their defence following the queries saying they needed to reach a concrete agreement before hitting the road.

Kitui Senator Enoch Wambua said their presence— of Wiper members—at the agreement signing, was a testimony of the end of the debacle that threatened Azimio’s unity even before proper takeoff.

“Our presence is a statement that Wiper is firmly on the table with colleagues in the Azimio la Umoja. It has been a long journey of serious talks,” he said.

Wambua disclosed that the talks reached “a place where we (they) were comfortable to sign the agreement.”

“From tomorrow, the country will see our principals campaigning together in any part of the country, starting with West Pokot. We will walk together and form the next government,” the lawmaker said.

“We will see our party leader (Kalonzo) take a lead role in the campaign. From today until August 9, watch this space. We'll set the media and political agenda of this country,” Wambua added.

A visit by President Uhuru Kenyatta to Kalonzo at his home is said to have eased the negotiations leading to the agreement the parties reached on Friday.

From tomorrow, the country will see our principals campaigning together in any part of the country, starting with West Pokot. We will walk together and form the next government

Jubilee Secretary Jeremiah Kioni hinted that the President’s intervention helped push the process which has to be concluded by April 9.

“We thank the President for helping the team form Azimio to this point where we have signed the documents in agreement.”

“The President has guided us by signing not because of what there is for the party but for what the movement stands for. It stands for the unity and continuity of development, deals with inclusivity, and the need to have shared prosperity,” Kioni said.

He urged Kenyans to shun Kenya Kwanza saying, “We know what the other side stands for. They are not keen on supporting CDF, Ward Fund, and have no room for pastoralists. They are characterised by anger, propaganda and insults.”

Kioni said the Jubilee party and its leadership will stay on the Raila course and welcomed their Wiper counterparts to the joint campaigns.

“We promise Kenyans we will work together led by Raila. We will move across the country together. Jubilee will work within this formation. We want Kenyans to benefit from the agreement.”

“We'll go to the Office of the Registrar of Political Parties to lodge the documents that would make the coalition party a legal entity,” he said, adding that the team “did not come together by accident but by design.”

“All of us know and understand what is at stake on August 9. Kenyans will go to the ballot box to make a choice. We ask that we make choices that will take our country forward,” Prof Makau added.

ODM secretary general Edwin Sifuna thanked the One Kenya Alliance team for what he termed as “their patriotism” following the deal with Wiper.

“It is good Wiper is here and we will walk with them as Azimio One Kenya….if we let those thugs become leaders in this country there will be no space for us.”

The deal, according to Wiper Secretary Shakila Abdalla, would be hinged on the philosophy of a “three-legged stool” with ODM, Jubilee and OKA as principal members.

The three would represent the interest of the parties which entered into a working partnership under Azimio la Umoja –One Kenya.

“We reiterate our commitment to unity, peace, stability and prosperity of the nation. We will make policy pronouncements on the campaign trail,” Abdalla said.

Kanu secretary general Nick Salat said they were happy the long road of the negotiations ended on a good note.

“We are happy to get here. From here, we will go for the real politic, that is moving from the boardroom to the field. We will speak with one voice, act with one objective and give Raila the necessary support to push him to the presidency against the other side which we all know would be a total risk to be let to handle the lives of Kenyans,” Salat said.

Pokot South MP David Pkosing welcomed the team to West Pokot. “We are elated to be the first to host the first day of the joint campaigns. We welcome you all. We are ready to receive Raila.”

Moses Kuria's message to Kalonzo after collapse of BBI